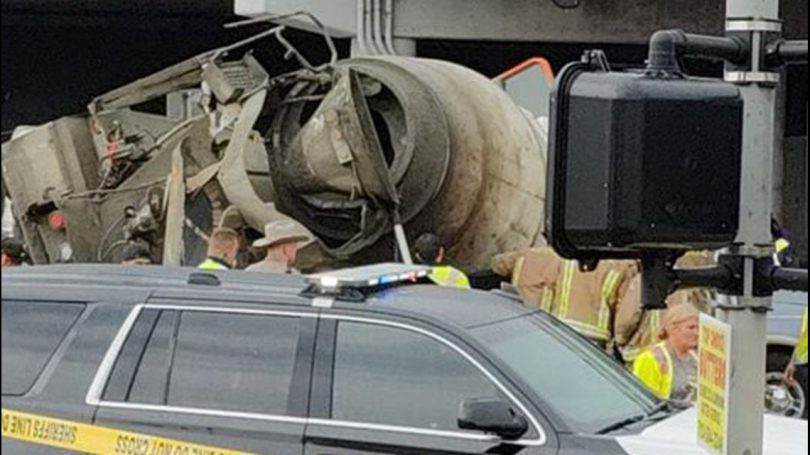 The crash happened at the intersection of Woodforest and Beltway 8, according to Gonzalez. The intersection will be closed under TxDOT determines it’s safe to open.

A toddler died Friday afternoon after a concrete truck went over an overpass on Beltway 8, landing on a vehicle, according to Harris County Sheriff Ed Gonzalez.

Gonzalez said there were four people — a 54-year-old woman, a 24-year-old woman and two 22-month-old twins —  in the vehicle when the concrete truck landed on it.

Three of the passengers were able to get out, but the sheriff’s office said one of the toddlers couldn’t.

The crash happened around 2:30 p.m. at the intersection of Woodforest and Beltway 8, according to Gonzalez. A deputy with HCSO said the driver of the concrete truck was a 36-year-old woman who did not show any signs of intoxication.

The deputy said a preliminary investigation shows that the driver attempted to slow the vehicle down before it went over the overpass. He said the slick roadways may have caused the crash.

HCSO said at around 4:40 p.m. that the intersection would be closed until the Texas Department of Transportation determines it is safe to reopen. Officials ask that you avoid the area at this time.

An investigation into the crash is underway. The Harris County District Attorney’s Office was on the scene to review the facts and determine whether any charges will be filed, according to HCSO.

You can watch the update HCSO gave at the scene below:

One witness told KHOU 11’s Zack Tawatari the crash unfolded right in front of her eyes.

“When somebody slams their brakes and you hear that screeching,” said Imelda Quintero, who witnessed the crash. “All the sudden something’s falling out of the sky basically and falling on another truck.