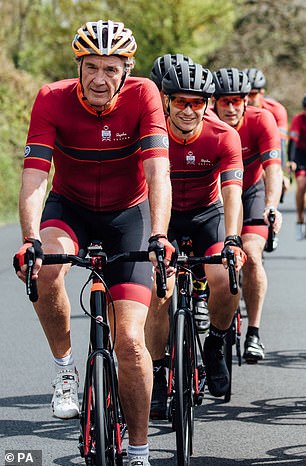 Gearing up: Sir Jim Ratcliffe, front, is mulling a takeover of Manchester United

Chemicals giant Ineos – founded by billionaire Brexiteer Sir Jim Ratcliffe in 1998 – has seen profits surge at its oil and gas arm due to soaring energy prices.

The bumper figures, showing an increase of more than 300 per cent to £474million, emerged as the tycoon expressed an interest in mounting a takeover of Manchester United.

Ratcliffe is already one of Britain’s richest men with a fortune estimated at somewhere between £6billion and £12billion.

Company filings show that profits soared at Ineos UK E&P Holdings to £474.4million last year – bouncing back from a loss of £226.2million in 2020. Revenue from the firm’s operations in the North Sea rocketed from £167million to £514million.

The company flagged the impact of energy prices, as it said the average gas price rose from 25.2p per therm in 2020 to 91p in 2021. Analysts say the gains will have risen further this year.

James Huckstepp, an analyst at S&P Global, said Brent Crude prices have soared by almost 50 per cent so far this year and oil majors are likely to benefit from higher profit margins as a result.

Richard Hunter, head of markets at Interactive Investor, said: ‘We’ve not long had half-year numbers from BP and Shell and they are raking in profits. The oil price has had a bit of a wobble but it’s still up this year. That’s bumper news for oil companies. This is their day in the sun.’

Ineos launched its North Sea operations in 2015. It is the fourth-largest chemicals company in the world, with annual revenues of £45 billion and 36 businesses in 29 countries.

The firm said the vast majority of its business is in chemicals and that its manufacturing sites are ‘currently tackling significant increases in gas pricing around the world’.

Its oil and gas profits from ongoing operations were £271.6million last year, which excludes one-off payments from selling businesses.

Ratcliffe, 69, is a cycling fanatic who owns the Ineos Grenadiers team as well as football clubs OGC Nice and FC Lausanne-Sport. He came under fire for moving to Monaco – along with two other Ineos executives – in a move that saves millions in tax every year.

Some links in this article may be affiliate links. If you click on them we may earn a small commission. That helps us fund This Is Money, and keep it free to use. We do not write articles to promote products. We do not allow any commercial relationship to affect our editorial independence.