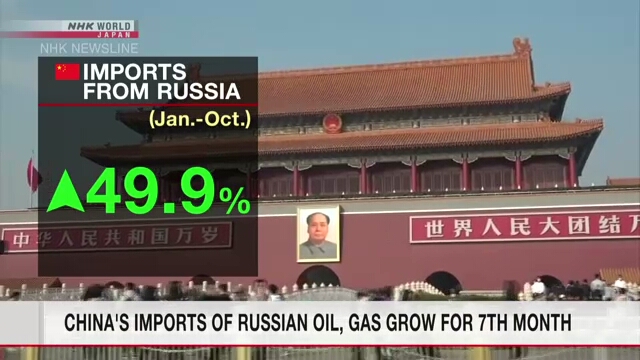 China continued to import more Russian energy in October, with oil and gas shipments both up for a seventh straight month.

Chinese customs authorities have announced that they imported more than 7.7 million tons of crude oil from their neighbor. That’s up 16 percent from a year earlier.

Liquefied natural gas imports were higher by a bigger margin of 55 percent, coming in at 750,000 tons.

The energy shipments contributed to 49.9 percent rise in the value of China’s imports from Russia in dollar terms for the January-to-October period.

Analysts say the oil and gas exports have been propping up the Russian economy since the start of the conflict in Ukraine.
The invasion prompted Western countries to impose economic sanctions against Moscow. Beijing opposes the measures.