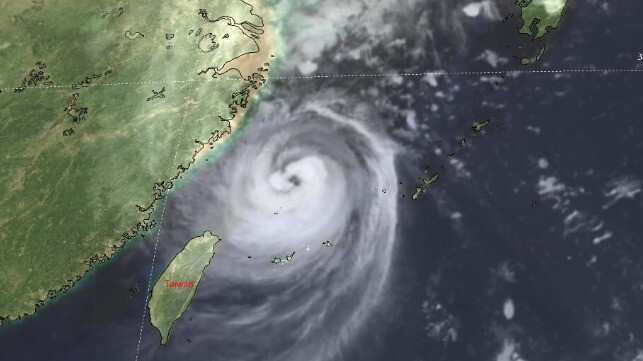 China’s major seaports are preparing for what could be a direct hit from the 12th typhoon of the season, but unlike last week’s storm, this one is expected to make landfall near the busy ports of Shanghai and the Ningbo-Zhoushan. The ports had already been reporting delays and it is expected that the current storm, Typhoon Mufia, could disrupt operations for several days both at the ports and inland transportation.

Recent reports indicated that the storm is 165 nautical miles northeast of Taiwan after having passed north of the island. Taiwanese officials were warning that the storm has a radius of nearly 100 miles and wind gusts up to nearly 120 miles per hour. While the storm was expected to remain offshore, Taiwan’s Central Weather Bureau was warning of strong waves, especially in the north, and heavy rains. Ferry service was being suspended for most of Taiwan and fishing boats were being warned not to proceed out while commercial shipping was also being warned of difficult conditions.

The latest weather observations included reports of some wind gusts reaching 135 miles per hour although the storm is forecasted to lose some strength before reaching the Chinese mainland. Waves ahead of the storm were being reported at up to 34 feet.

China ordered all ships to take shelter with the large containerships told to head to sea in advance of the storm. State media is reporting that more than 7,000 ships are taking shelter with operations in all the ports expected to begin closing on Tuesday evening and be suspended all day on Wednesday.   Forecasters are warning that the waves at Shanghai could reach 16 feet.

Other elements of preparation have ranged from evacuations of tourists and residents in some outlying areas. Flights are being suspended in and out of Shanghai’s airport and some train service is also expected to be canceled. 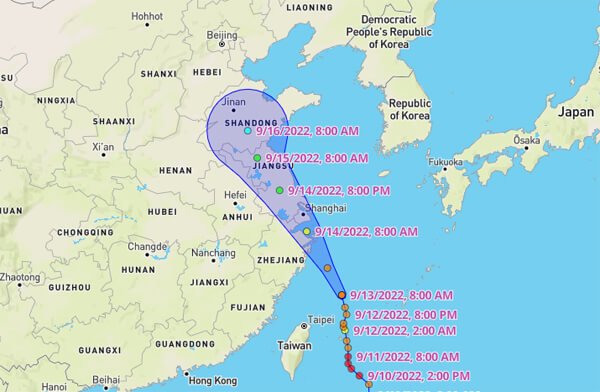 The preparations for the storm were being intensified because unlike Typhoon Hinnamor which passed offshore last week, this storm’s current course projects it will make landfall south of Shanghai. It is expected to proceed north over the city and continue inland. More than 40 million people are believed to be in the path of the storm.

The storm comes at a time when Shanghai in particular has been reporting strong throughput volumes. On September 8, Chinese officials said that Shanghai set a new one-day record handling 160,058 TEU in 24 hours. That was 1,200 more TEU than the prior daily record of 158,858 TEU in 2021. At the end of the first eight months of the year, Shanghai is slightly ahead of 2021 volume with a throughput of just over 31 million TEU. The increase in volumes comes despite the port being impacted by COVID-19 related lockdowns for much of May this year. The Ningbo-Zhoushan complex in May set a new monthly record of approximately 3.3 million TEU.