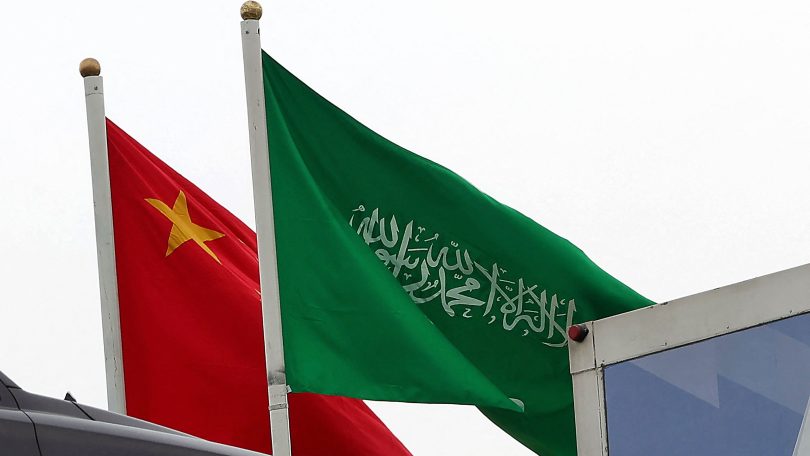 Saudi and Chinese flags flew on Wednesday in Riyadh, the Saudi capital, as he arrived, an honour flight flying over.

He waved from his state aircraft then later descended to greet Saudi officials on hand at the airport.

Gulf Arab states are trying to re-calibrate their foreign policy as the United States turns its attention to elsewhere in the world.

Russia’s war on Ukraine — and the West’s hardening stance on Moscow — has also left the Arab countries wanting to cement ties with China.

During the visit, Xi is expect to attend the inaugural China-Arab States Summit and a meeting of the Gulf Cooperation Council, which includes the kingdom along with Bahrain, Kuwait, Oman, Qatar and the United Arab Emirates.

Though few other details about the visit have emerged, Chinese authorities offered superlatives ahead of the trip.

It’s the “largest and highest-level diplomatic event between China and the Arab world since the founding of the People’s Republic of China and will become an epoch-making milestone in the history of China-Arab relations,” Foreign Ministry spokesperson Mao Ning told reporters at a daily briefing on Wednesday.

Whether the meeting reaches those heights, Xi knows he needs that supply of crude oil. China, the world’s largest crude oil importer, relies heavily on Saudi oil, paying tens of billions of dollars annually to the kingdom.

For Prince Mohammed, hosting Xi boosts his own international profile after being linked to the killing of Washington Post columnist Jamal Khashoggi.

Beyond China’s oil purchases, its construction expertise could be tapped as well for Prince Mohammed’s planned USD 500 billion futuristic city of Neom on the Red Sea.

Chinese construction firms have worked elsewhere in Arab countries in the Persian Gulf, particularly in Dubai in the UAE.

Saudi Arabia, home to the holiest sites in Islam, also has provided political cover to China over its harsh policies toward Uyghurs and other Muslim minorities.

More than a million have been sent to detention centres, forced to denounce Islam and swear fealty to Xi and the party.

The trip to Saudi Arabia marks a further move by Xi to restore his global profile after spending most of the pandemic inside China.

The visit is his third overseas trip since early 2020. It also comes as Xi, who was granted a third five-year term as leader in October, has faced street protests over his zero-COVID-19 policies that represent the most-significant challenge to his rule.

The political risk consultancy Eurasia Group said in a report that with no major differences between China and Saudi Arabia on human rights, the tone of Xi’s visit is “likely to be much more positive” than the visit earlier this year to the kingdom by US President Joe Biden,

“Nevertheless, the relationship still has a long way to go if it is to become as deep and nuanced as Saudi-US ties,” the report said.