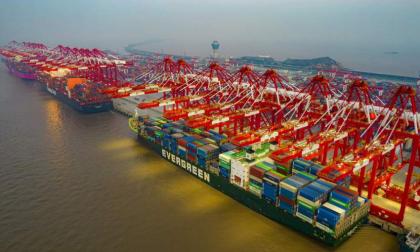 China’s largest sea ports posted strong performance in 2022 braving the negative impact from the COVID-19 pandemic, with Chinese industry and trade experts saying the resilience demonstrated by China’s ports are indicative of the country’s strong potential in continuing to develop its vast exports sector in 2023.

As 2022 came to an end, many of China’s large sea ports have posted data of strong growth.

It was reported that the port’s business saw a V-shaped recovery in July, after the disruption from April to June, and it set records on daily container throughput on the 8th and 11th of September.

On Friday, Shandong Port Group Co, the port conglomerate in East China’s Shandong Province, announced that it handled 1.6 billion tons of goods in 2022, ranking number one globally. For containers, the company said it has handled 37 million TEUs, ranking third globally, with an annual increase of 8.7 percent.

The port said that its development has boosted Shandong’s exports by 20 billion yuan ($2.9 billion) in 2022.

The pandemic’s negative impact and slowing demand after 2021 have posed a series of challenges for Chinese ports in 2022.

The virus hit the port of Yantian in South China’s export powerhouse Shenzhen port in March, followed by outbreaks in Shanghai, which affected the operation of the Port of Shanghai. Following that, the Port of Ningbo was also struck by an outbreak.

However, Chinese port operators rose to the challenges with flexibility and ingenuity. Ports adapted by arranging workers to stay in closed loops, opening up new shipping lanes and extending railways right into the port.

Wu Minghua, a veteran Chinese shipping analyst, told the Global Times on Monday that Chinese ports have been “full of resolve and striving to achieve the best results” against the odds in 2022.

The all-year efforts to ramp up foreign trade have shown good results, Wu Minghua said. “With these efforts, it is expected that the global ranking of Chinese ports will remain largely the same in 2022, although some ports haven’t posted their data yet.”

Wu Jiazhang, a port analyst with the Shanghai International Shipping Institute, told the Global Times on Monday that Chinese ports have put in a better performance in terms of cargo and container throughput among the top 20 global ports.

Analyzing the data from the first three quarters, the latest available data, Wu Jiazhang noted that the global demand decline has resulted in a decrease in throughput at Port of Singapore and Port of Busan in South Korea.

According to Ministry of Transport data, Chinese ports’ cargo throughput during the first 11 months of 2022 slightly increased by 0.7 percent year-on-year, while container throughput expanded by 4.2 percent. Although the container figure was less than the whole year figure for 2021, which came in at 7 percent, it still showed expanding momentum, experts said.

Wu Jiazhang said many ports were still able to log an increase of over 5 percent in their container throughput during the January-November period while their global counterparts saw drops, and the Port of Tianjin is likely to claim the title of the world’s No.7 container port from Busan for 2022.

Bai Ming, deputy director of the international market research institute at the Chinese Academy of International Trade and Economic Cooperation, told the Global Times on Monday that the fact that China’s leading ports have coped with the impact of the pandemic and remained resilient bears similarities to the Chinese economy.

Despite facing multiple pressures, the Chinese economy has proved to be comparably resilient during the year, thanks to its strong supply-side strength and the potential of its vast market, Bai said.

Looking to 2023, Bai said if US and European markets wither due to an expected recession, China’s exports could still find new rooms for growth from markets under the Regional Comprehensive Economic Partnership (RCEP) trade deal and the Belt and Road markets.

Bai noted that although the sub-index for exports orders in the manufacturing Purchasing Managers’ Index have been weak for some months, the reading indicates tough, rather than shrinking exports orders, due to the way the statistics are gathered.

Wu Jiazhang said the new demand stemmed from the fast development of cross-border e-commerce and improved efficiency at ports as a result of improved digital infrastructure.

In 2023, the industry will have to cope with a number of new issues, such as the record number of empty containers at various Chinese ports and the pressure to dissipate them, supply and demand disorder for shipping lanes and falling rates, Wu Minghua said.