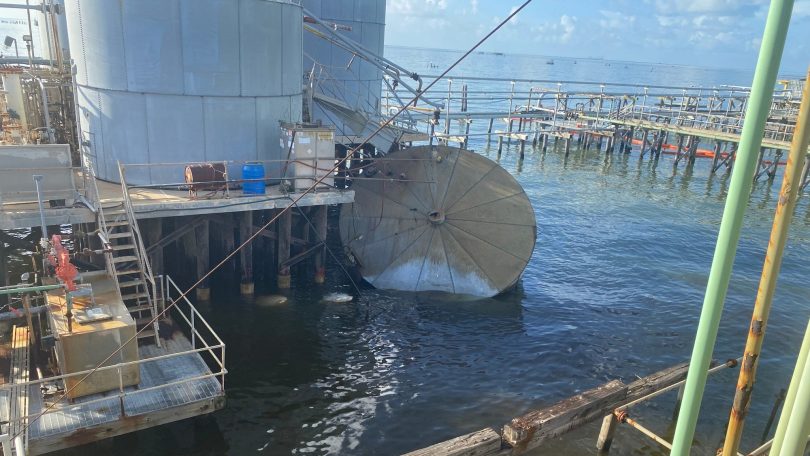 The U.S. Coast Guard responded to an oil spill Monday in waters off Louisiana.

It happened when a structural failure at an oil tank platform caused a tank to fall into Terrebonne Bay, the Coast Guard said in a news release. The facility is owned by oil and natural gas company Hilcorp, which estimates that less than 14,000 gallons of oil spilled.

Louisiana is the No. 2 producer of crude oil and No. 4 producer of natural gas in the U.S., according to the Grow Louisiana Coalition. About 18 refineries are located in the state and the industry generates about 260,000 jobs, the coalition says on its website.

(MORE: Where Hurricanes That Made Landfall In The United States Originated)

Monday’s spill happened about 16 miles west of Port Fourchon, a hub for support of the petroleum industry.

The Louisiana Oil Spill Coordinator’s Office estimates that more than 330,000 gallons of oil are spilled in the state each year.

Dozens of spills were reported last year after Hurricane Ida made landfall near Port Fourchon. The General Account Office said the spills highlighted the need for better oversight of offshore oil and gas pipelines, including more than 26,000 miles of active and inactive lines in the Gulf of Mexico.

Parts of Louisiana are still feeling effects from the massive Deepwater Horizon spill that happened in 2010. A study released Tuesday showed that small amounts of weathered oil residue were still present in some areas 10 years later.

The Weather Company’s primary journalistic mission is to report on breaking weather news, the environment and the importance of science to our lives. This story does not necessarily represent the position of our parent company, IBM.