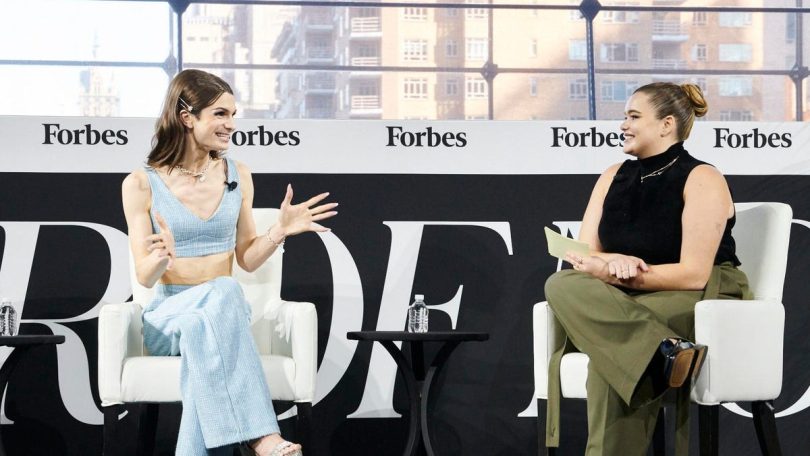 Today is Dylan Mulvaney’s 189th day of being a girl. The actress, comedian and social media mogul first took to TikTok in March to document her journey transitioning as a transgender woman—dubbing her series “Days of Girlhood.” Now, with 7.7 million TikTok followers (of which Lady Gaga is one), the series is paying for her transition.

That’s the power of social media in 2022. But it’s not as simple as it sounds, Mulvaney cautioned. Influence also comes with learning to be vulnerable and versatile, grappling with mental health struggles and finding ownership of your voice, Mulvaney said at the 10th-annual Forbes Power Women’s Summit in New York on Thursday.

Mulvaney joined the stage with comedian, actress and writer Grace Kuhlenschmidt and actress Barbie Ferreira to talk about the power of influence and the creator economy. The three are standout examples in how to leverage social platforms to break the entry barriers for mainstream “traditional” media like TV and film, comedy and fashion. Content creation requires finding your niche, but it’s also about discovering ways to diversify your influence, content and revenue streams, the trio said.

“People want to put you in a box,” Mulvaney said. The one-time Broadway actor says she now tries to keep her niche broad. “That’s where we’re at in the industry right now is we’re watching people do so many different things, and that’s what’s special about these applications and using them to our advantage.”

Multi-hyphenation seemed to be the theme at this year’s Summit. Whether it’s creating their own products or co-brand with companies, the influencer-to-entrepreneur pipeline is a natural progression, says Mae Karwowski, founder and CEO of influencer marketing agency Obviously.

“You start working with some of the biggest brands in the world and start launching your own businesses,” Karwowski told Forbes in a video interview last month. “It’s just a real path to entrepreneurship.”

Mulvaney and Kuhlenschmidt, along with creators like Addison Rae Easterling, are now writing and starring in films and TV shows.

“There’s no blueprint or guidebook,” Ferreira said Thursday. “It’s a new way of interacting with the world and entertainment in general.”

Launchmetrics cofounder and CEO Michael Jais started the software company to track data across social platforms for fashion, beauty and luxury brands. He says TikTok, with its comedy skits and new dances, isn’t competing with other social platforms but rather the entertainment industry. “It will be hard for influencers to adapt because it’s not the same skills,” Jais says. “It’s about comedy, and music is critical, which is not the case at all with Instagram or blogging.”

Mulvaney and Kuhlenschmidt said they’ve gotten more auditions since their TikToks have gained in popularity.

“There’s so many people watching the internet and looking out for young talent that hasn’t been discovered yet,” Kuhlenschmidt said from the Forbes stage. “It’s a whole different dynamic on how to get actors; you used to go to the agency and have someone believe in you and they created your brand. And now you have your own platform, your own creativity, and people are tuning into what you want to do and not necessarily this big machine of other people.”

And because of this new level of autonomy, content creators are able to take more ownership of their brand, the social media mavens said. For influencers who want to strike deals with bigger brands, the key to maintaining an authentic voice is creating your own content and finding collaborators to work with who value the real you, Mulvaney said. Mulvaney has done brand partnerships with Kate Spade, Neutrogena and OKCupid.

“There’s also a level of trust that needs to come from an older generation,” she said. “They need to say, ‘we respect you enough to take the reins on this or to write your own script for the commercial.’”