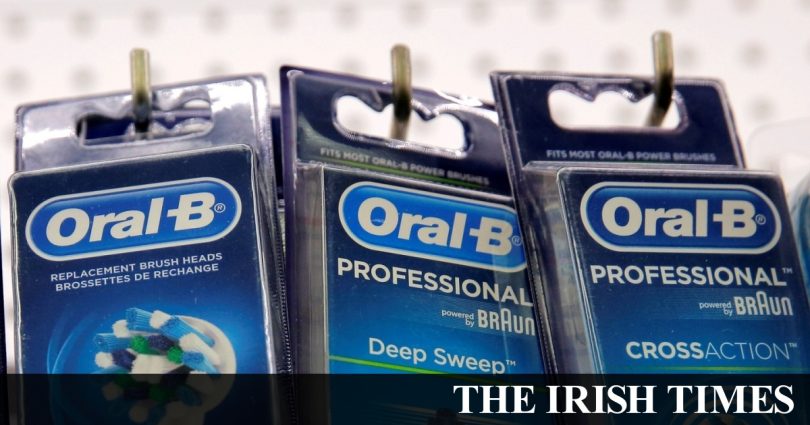 Consumer goods giant Procter & Gamble has pulled the plug on its final manufacturing presence in Ireland with the sale of its oral hygiene plant in Newbridge, Co Kildare.

As part of the deal, which sees the Newbridge plant taken over by Indian healthcare manufacturer Mapaex, Procter & Gamble last month paid €45 million into the company’s pension scheme.

That was the final element of a protracted $10.5 million (€9.95m) sale of the business that was first announced in November 2020.

The plant produces the Oral B range of toothbrushes, dental floss and make-up powder refills as well as cartridge refills for Braun electric shavers.

The sale of the plant marks the end of Procter & Gamble’s manufacturing operations in Ireland, which used to comprise three facilities. The company closed its Braun shaver refill plant in Carlow in 2011, with the loss of 167 jobs, moving the Braun operations to Newbridge. In 2016, its Nenagh plant, which produced mascaras and powders for the Max Factor range, transferred to rival beauty business Coty as part of a $12.9 billion sale of Procter & Gamble’s specialty beauty business.

Coty announced the closure of the Nenagh business just months later, with the loss of close to 250 jobs.

Procter & Gamble says all the 350 or so staff remaining at the Kildare plant will transfer to its new owners. Staff numbers have been falling over recent years.

The US company has committed to taking Oral B and Braun product from the plant for the next decade. The plan is for the new Indian owners to bring new product lines on to the site which has struggled with excess capacity in recent years.

Profits at what has been the main Irish arm of Procter & Gamble fell by a quarter last year, to €6.1 million, partly due to a drop in demand for manual toothbrushes that has been a feature of the business in recent years.

Recently filed accounts for Procter & Gamble (Manufacturing) Ireland, for the year to the end of June 2021, note that the sale of the Newbridge plant to Mapaex was completed on May 1st this year.

Procter & Gamble said costs at the Newbridge business had remained a challenge last year, with an increase in commodity prices only partially offset by internal cost savings and productivity initiatives. The company paid no dividend to its parent group.

The US parent has not received a dividend from the Irish manufacturing business since 2018 when it was paid €21.25 million.

Turnover at the business jumped to €109 million last year from €67.2 million in the 2019/20 period. However, it incurred over €40 million in restructuring costs, compared to less than €3 million the year before. The bulk of that was accounted for by the €36 million writedown in the value of the company’s fixed assets because of the transfer of the plant to Mapaex. An additional €4.26 million was set aside as a provision for the cost of transferring staff to the new business.

Redundancy costs in the year were just €124,000, down from almost €2.8 million the previous year.