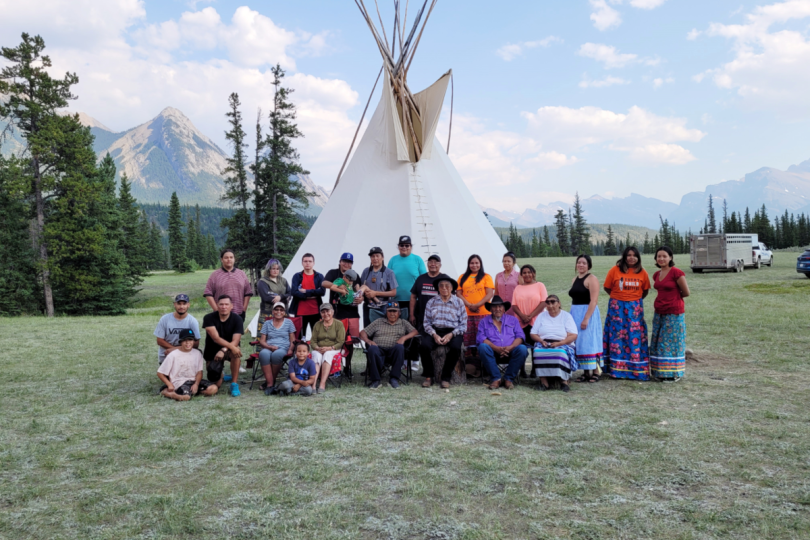 The Cooks with Stones summer student program, a partnership between the Further Education Society of Alberta (FESA) and the Stoney community, goes beyond building employment literacy and essential skills – its greater goal is to empower a workforce in the communities of Mînî Thnî, Big Horn and Eden Valley, to be able to live and work within the First Nation’s traditional territories where many feel “most connected at heart.”

“We want to demonstrate that Stoney people, whose livelihoods were once in the mountains before we were moved to the eastern slopes, can work in the tourism industry, and start there,” said Smallboy-Wesley. “We want our young people to be able to say, ‘We do feel comfortable to work in the mountains where our ancestors always resided and we have a safe space to work.’

“That’s the tough part for many – feeling safe. Feeling like you’re not going to be colonized or judged at the workplace or through education and training to get there.”

The program creates job placements within the tourism and hospitality industry for Stoney workers between the ages of 16 and 30 with a partnering employer, Pursuit, by merging the First Nation’s culture and traditions with employment training for the benefit of both the participants and the employers.

Before the job placements are made, the participants and partners undergo training to “meet each other in the middle,” said Smallboy-Wesley. This includes allowing employers to participate in traditional ceremonies to understand the Stoney way of life.

It also includes a review of how and where to fill out information on new hire forms as program facilitators identified some basic misunderstandings by participants in providing accurate banking information, home addresses and emergency contacts to employers.

For Smallboy-Wesley, who is from Îyarhe Nakoda First Nation and now lives and works in Calgary, it isn’t hard to understand how some of these seemingly simple missteps can occur.

“There are all these layers that go into onboarding a new employee that we kind of take for granted living off the reserve,” she said. “We know these terms and we fill out English language forms like this often, but that isn’t the case for many people living on the reserve.”

Smallboy-Wesley said misunderstandings are usually easily corrected by reminding participants of what they already know and by building confidence.

“It’s just a matter of looking at a term, word or phrase from a different lens, and empowering the community to look at these things from both a Stoney and non-Stoney perspective, and to not be ashamed of not knowing something,” she said.

Shawna Linklater, program trainer and facilitator with FESA, said Cooks with Stones also highlights the essential skills that Stoney participants already have by demonstrating how they can transfer those skills from the camp to the kitchen.

“In some ways, we have to remind people of what they bring to the table,” said Linklater. “And once people recognize how competent and capable they really are, it lifts their spirits up and empowers them in a way that changes their view of themselves.”

Likewise, partnering non-Indigenous employers are challenged by the program to view the workplace from a Stoney perspective, being culturally aware of the needs of their employees.

Cooks with Stones, which just wrapped up its second year of operation, has successfully found permanent job placements for all participants. Its success has drawn the attention of ABC Life Literacy Canada, which recently awarded the program with the Canada Life Literacy Innovation Award.

Each year, the award is presented to organizations that develop and implement innovative adult literacy skills programs in communities across the country.

Teal Dratowany, pathways project manager with FESA, said the recognition serves as a sign that the program is working.

“A lot of people have put a lot of work into this initiative and it’s really exciting to see it acknowledged,” she said. “We’re still learning and making improvements, but we feel this is something others could learn from and try to implement on their own scale.”

The award also comes with a $20,000 prize, which will be used to help fund the bursaries each participant receives at the end of their unpaid work placement.