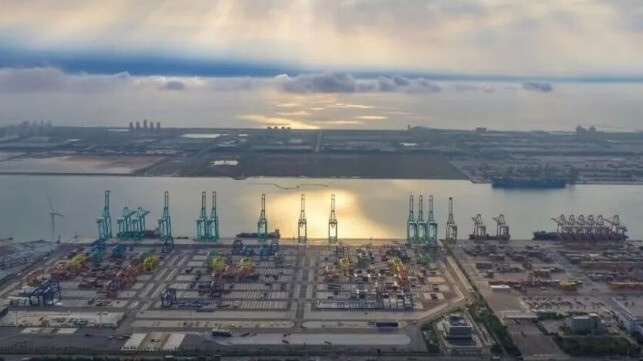 COSCO Shipping completed the second phase of its project to create a green energy hub that the Port of Tianjin. One of China’s ten largest seaports and its northernmost port, COSCO is converting the terminals to operate on sustainable energy.

Early in December, COSCO reports it completed the construction and installation of three additional wind turbines as part of Phase II of the Green Intelligent Energy Demonstration Program. Each of the turbines stands approximately 325 feet off the ground with each blade measuring approximately 230 feet. Jointly implemented by COSCO SHIPPING Tianjin, COSCO Goldwind, and Tianjin Port Group, the new installation adds another 15 MW of wind energy for the port’s operations.

During Phase II, the project team members considered the environmental adaptability of the wind turbines, the electricity consumption of the terminal, and the clearances. Beyond the technical considerations, they also invited experts from the China Academy of Art to design the tower painting for the wind turbines. In line with modern aesthetics and to integrate them into their surroundings, the three wind turbines were painted with gradient shades, with green, blue, and red as the main colors, symbolizing environmental friendliness, port and hub, respectively.

The Green Intelligent Energy Demonstration Program Section C of the Port of Tianjin (Phase II) is located in the area of the Beijiang Union International Container Terminal and Ro-Ro Terminal. Funded by Tianjin COSCO Goldwind New Energy Co. Ltd., a subsidiary of COSCO SHIPPING Tianjin, the project includes three GW171-5MW wind power generators. Now that they are commissioned, they are expected to provide 35 million kWh of clean electricity annually, saving about 14,000 tons of standard coal and reducing about 34,895 tons of carbon dioxide emissions.

Last year, during Phase I of the project, an initial 9 MW wind was connected to the grid at the port. With the additional installations commissioned this month, the port now has five wind turbines with a total installed capacity of 24 MW. In another part of the project, the partners have also installed photovoltaic capacity of 1MWp, which is expected to provide 58,357,000 kWh of clean power to the Port of Tianjin every year, which according to port officials is injecting new momentum into building the port into a world-class smart green hub.

The port highlights that its terminals are becoming self-sufficient using clean energy for operations. The project is also designed to support the growth of port operations. So far in 2022, the port has reported a better than four percent growth in volumes. It has handled approximately 18.4 million TEU.