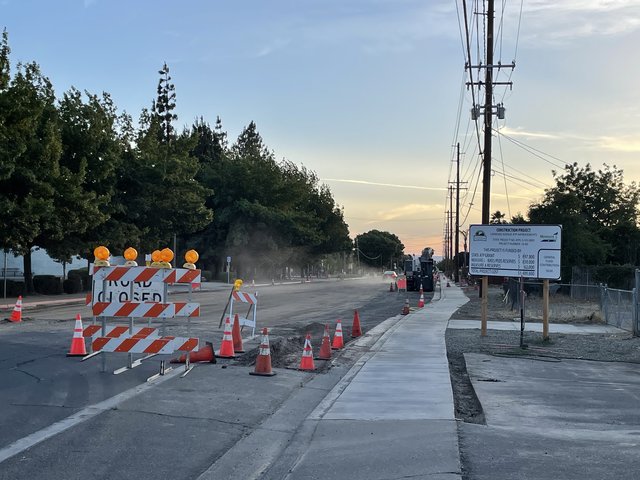 Editor’s note: This is the first in a four-part series where the Journal will ask Turlock mayoral and city council candidates to give their positions on four issues that are key to the majority of the city’s residents: roads, water, homelessness and public safety.

Ask any Turlock resident what the number one problem in town is and nine times out of 10 the answer will be ‘the roads.’

In the past, funding was the major obstacle in getting any roadwork projects underway. Over the past several years, the City has seen an increase in available funding through the passage of Measure L — the 25-year one-half cent special sales tax Local Roads First Transportation Funding — approved by voters in November 2016 and Measure A, a citywide sales tax measure approved by voters in 2020 to fund Turlock services.

The Turlock City Council has been working to use the funding to make improvements to the city’s roadways. In 2019, the Council votes to approve a road strategy that utilizes a funding breakdown of 60 percent for residential roads, 20 percent for collector roads and 20 percent for arterial road classifications. In the past, the majority of road funding was used for work on main thoroughfares — such as West Main Street — because the City could leverage its own funds to get federal or state funding for the project as well.

The City of Turlock Roads Program Initiative was launched in 2021 and aims to rehabilitate Turlock’s 508 lane miles of roads, which currently have a pavement condition index of 62 out of 100, over the course of the next five years by allocating 50% of Measure A funding for the cause.

An estimated total of $5.5 million will go towards road projects annually in addition to other funding sources, increasing the City’s existing road funding by 100%. The City’s first step in the initiative was to hire a new Roads Program Manager, Fred Pezeshk. In November 2021, the City of Turlock approved an agreement with Michael Baker International to develop a five-year roads program.

The Turlock Journal asked current mayoral and city council candidates what their position was on the issue of roads in Turlock. Here are their answers:

Mayoral candidate Amy Bublak: “Since joining the Council over 12 years ago fixing our roads has been a consistent request by Turlock residents.

“No City general funds were spent on fixing our roads for almost thirty years. There was no money to fix roads for many years.

“Finally, a state program under Senate Bill 1 (SB1) and a county-wide program under voter-approved Measure L allowed the City to begin fixing roads. Unfortunately, these programs were not enough to make meaningful progress on the backlog of poor Turlock roads that need repair. So when I ran for Mayor in 2018, I made fixing roads a top priority.

“Although I wasn’t able to achieve consensus on any plan to accelerate the pace of road repairs in my first two years as Mayor, we achieved a breakthrough in late 2020 with the election of our two newest City Council members, Pam Franco and Rebecka Monez.  With their support and vision, we approved the Turlock Roads Initiative (TRI) which put forward a comprehensive and transparent plan, based upon public input, to accelerate fixing Turlock roads.

“By committing half of Measure A revenues (the sales tax approved by Turlock voters in 2020) to augment the funds the City receives from the SB 1 and Measure L programs mentioned above, we are able to implement a plan to fix Turlock roads many, many years faster than before adoption of the Turlock Roads Initiative.

“Since we began the initiative, we have determined the actual condition of all Turlock roads with impressive technology that will allow us to utilize your tax dollars in the most cost-effective way in repairing roads. Combined with public workshops to seek input from Turlock residents on possible road repair schedules, the City Council will be able to adopt a sound approach to finally address this key challenge that has burdened our community for decades.

“In the last two years, we completed (or are near completion) of road construction projects at Golden State Boulevard, Lander Ave, Hedstrom Road, Linwood Avenue and Hawkeye Avenues.

“An additional 15 roads are being developed for Council authorization for repair in the near term. Unfortunately, what our consultant thought would be relatively fast repairs will take longer since the roads were in worse condition than estimated due to many years of neglect.

“I am very appreciative of the commitment shown by the City Council majority, City Manager Reagan Wilson, Development Services Director Katie Quintero, Roads Program Manager Fred Pezeshk and all other City staff to address road repair which had been neglected for over 30 years.

“Good roads are a key element in keeping Turlock strong and I am pleased we have made fixing roads a priority by allocating on an annual basis, fifty percent of the voter approved measure A funds to road repair and construction.

“Together we are keeping Turlock Strong.

“If re-elected as Mayor, I will continue to rally support from my City Council colleagues and City staff to keep fixing our roads as a top City priority. Also, I will always seek INPUT from Turlock residents on their road priorities as we fix roads through the Turlock Road Initiative. We have some important decisions to make such as consideration of bond financing to make repairs faster and the optimal combination of expert contractors and City staff to expedite design of future road project.”

Mayoral candidate Gil Esquer: “When I was first elected the city of Turlock didn’t have any funds dedicated to address our road improvement needs. When I left office, we finally had the funding to start addressing our road network needs in a meaningful way, thanks to Turlock voters approving two measures (neither measure supported by Bublak).

“Because I helped put Measure A (Turlock Sales Tax) on the ballot, I know the intent to increase our road repair capabilities and fix roads with much needed urgency. Not waste millions of dollars on big-city ‘consultants’ who just duplicated the work our city engineers and planners do daily. The road repairs that were completed this year were planned and funded when I was on the council–before 2020! We deserve better.

“I will be committed as your Mayor to get our own city engineers, planners, and maintenance crews back on track and bolster their efforts with the additional funding entrusted by Turlock citizens. I will lead alongside district representatives who will each have their own unique infrastructure needs for their areas. As a team, we will create a road repair and maintenance schedule that will be protected by resolution to ensure newly elected politicians cannot come into office with the goal to undo the successes of past leaders for political reasons. This only leads to where we are now: a pointless cycle of starting from scratch every four years. With your vote, I’ll ensure you know when your neighborhood streets will be repaired. As Mayor, I will gladly be held accountable by you, for you.”

District 1 Council candidate Kevin Bixel: “Our city has more money than ever dedicated to upgrading and maintaining our road network. If elected, I plan to utilize every dollar in the most efficient and effective way. City leaders need to start with a plan presented by our city engineers to be vetted by the public and be held accountable to it for years to come. I promise that every citizen will have access to a road repair and maintenance schedule that shows when YOUR road will finally be repaired or restored and maintained.

“District 1 is the most historic part of Turlock. Its history is one of the many reasons why I will be so proud to represent the district. However, with great history comes decades and, in some cases, over a century of neglected streets and roads. I will fight for road funding to go towards the roads that have withstood the longest time of neglect where neighbors have endured hearing empty promises from City leaders for far too long. To do that, our city needs a realistic plan that will not change every election cycle, for the future of our city.”

District 1 Council candidate Chris Nichols: “Roads are always on top of everyone’s mind. With the measure A tax there are additional funds that have been allocated to go to roads. In my district there are roads that need major help but I wouldn’t want to over step any other district because there are multiple roads that need help. I know there was a company hired to see what roads were in much needed repair. We need to come up with a cohesive plan with all 4 districts so everyone is recovering their fair share. I believe the thoroughfares should be addressed first and then the rating system after that. I look forward to working with the council and the citizens to come together on the roads of Turlock.”

District 3 Council candidate Kelly Higgins: “The current program is very detailed. I believe the city is on the right track and although it will take some time to implement, the plan is a long-term restoration that the people who drive Turlock roads will be pleased with.

“I suggest residents attend the city council meetings to get a better understanding of what is really happening with the roads.”

District 3 Council candidate Cassandra Abram: “The City has done well to prioritize road improvements, and the Council will soon have an opportunity to make a significant investment in the quality of our roads. I support the plan that makes the greatest improvements in the shortest time frame, while keeping costs manageable over time. Voters want improved roads, as shown by the passage of Measure L and Measure A, and leveraging those funds for a 5-year improvement project will make great strides in the quality of our roads.

“Our city needs to be responsive to residents’ concerns on roads because roads only get worse with time. I will advocate for transparency and community engagement in how our city addresses road issues. Residents should be able to easily access the information on when their local roads will be fixed. We need a dynamic system that allows residents to report problems with roads and get answers on how and when their concerns will be addressed.”

District 3 Council candidate Ramin Odisho: “Turlock roads needs to be refurbished. And to be fixed at Asap. The repair crews need to stop patching over the roads (potholes) and to start fixing them correctly like there’s no tomorrow. Poorly maintained roads constrain mobility, significantly raise vehicle operating costs, increase accident rates and their associated human and property costs, and aggravate isolation, poverty, poor health, and illiteracy in rural communities.”

District 3 Council candidate Ryan Taylor: “As of now, Turlock has a 5-year road program going which is a way to fix the immediate problems. The city council has committed $5,500,000.00 for road rehabilitation which is half of the annual $11,000,000 anticipated monies from Measure A, the ¾-cent sales tax measure passed in 2020. This is a good start to fixing our roads but now Turlock needs to work on a long-term solution to maintain the roads.

“I would like to see a 10-year maintenance program for our roads. Road repairs would be monitored for usage, wear, and regular maintenance. Now that Turlock is putting funding towards fixing much-needed road issues we need to ensure that the roads will stay up to date and maintained. We need to monitor our roads and ensure that they don’t fall below a certain quality/standard. The people of Turlock deserve to drive on quality roads throughout our city and neighborhoods.”