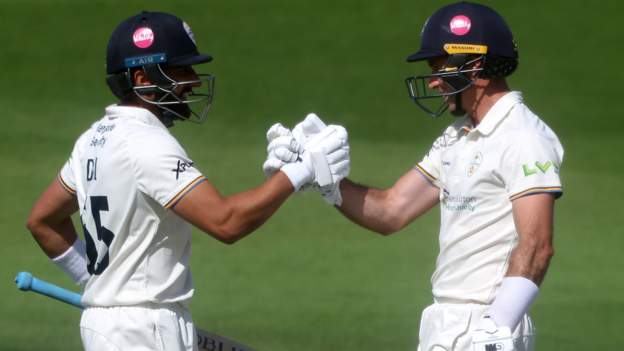 Derbyshire’s batsmen ran amok to place their side in total control on the second day of their County Championship match against Sussex at Hove.

The visitors piled up 551-8 before declaring and at the close Sussex were 142-3 in reply.

The Sussex bowlers toiled on a flat pitch and on a warm day and their worst period was after lunch, by which time Derbyshire were seven wickets down.

Sussex did take an eighth wicket, but then Anuj Dal (146 not out) and Mark Watt (55 not out) thumped a century partnership off just 115 balls.

Their unbroken stand of 108 in 20 overs is a new ninth-wicket record for Derbyshire against Sussex, beating the partnership between Maynard Ashcroft and Joe Humphries at Hove in 1904, a match in which the great CB Fry scored a double century.

In their partnership Dal, who scored his second century of the season from 236 deliveries, and Watt appeared to score at will and at one period Sussex captain Tom Haines handed over control of his side to Steve Finn.

Haines had left the field for a spell but when he returned he fielded at long-off while Finn talked to the bowlers and set the fields.

Sussex are looking for their first championship victory since April 2021. That looks well beyond them already and it did not get much better when they batted.

Ali Orr was bowled for five by Sam Connors, who then dismissed Haines, driving, for 17. But then Tom Alsop (44) and Mohammad Rizwan (54 not out) added 95 before Alsop fell to a juggling catch at midwicket shortly before the close.

Derbyshire had resumed on 339 for five, with Wayne Madsen on 171 and Dal unbeaten on 45. The batsmen had already put on 136 and soon added the three runs needed to make it a sixth-wicket record for the county against Sussex.