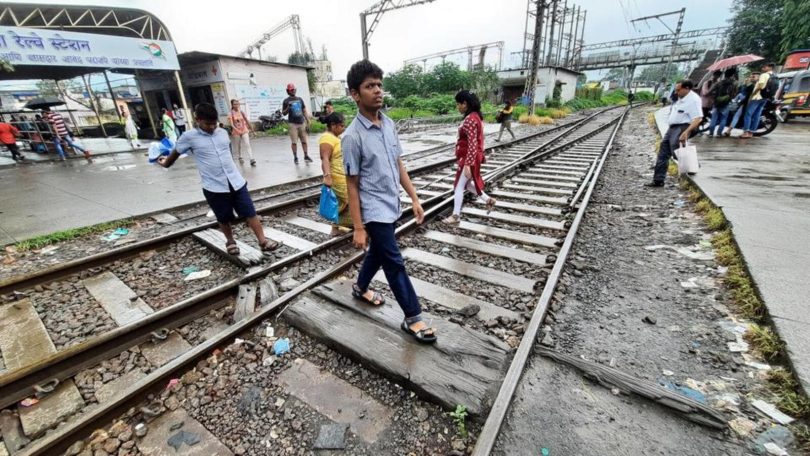 Mumbai: This year, the Central Railway (CR) has recorded more deaths and injuries due to trespassing railway tracks as compared to the Western Railway (WR). While WR has fenced the boundaries of railway tracks on both sides up to Dahanu Road station, CR still has a railway crossing at Diva which is often used by many commuters to cross tracks.

Meanwhile, stations like Thane, Kalyan and Dadar are overcrowded with both long-distance and suburban trains using these stations.

Overall, there are 996 incidents of trespassing recorded till September this year. Among the 848 deaths that are recorded this year due to trespassing, 516 occurred within CR and 332 in WR.

Compared to the number of trespassing incidents that took place last year, both CR and WR this year have recorded 70% of such incidents till September. In 2021, there were 1114 deaths and 176 injured from January till December, while this year there are 848 deaths and 148 injured till September while crossing tracks.

In 2021, most number of incidents of crossing tracks happened in Kurla, Thane, Kalyan and Borivali. The number of incidents is almost as much as last year whereas the numbers of commuters in both CR and WR have not reached pre-pandemic levels. From an average of 79 lakh on both routes in 2019, the number has dropped to around 60 lakhs since January 2022, and has lately remained stagnant.

Sumit Thakur, chief public relations officer, WR, said, “We have made provisions for escalators and lift apart from existing foot over bridges (FOB) wherever possible. Moreover, there are boundary walls along the railway track from Churchgate to Dahanu Road on WR. We also keep an eye out for any miscreants pulling down these walls and through regular checks ensure to maintain it.”

Meanwhile, along CR, stations like Kalyan, Dadar, Thane, Diva and Dombivali have the most number of incidents due to trespassing. Kalyan has the highest number of trespassing deaths at 44 this year.

“All these stations like Kalyan Dadar and Thane are overloaded with both local trains and outstation trains. This includes the number of services and commuters that use the station premises at any given point of time. With the presence of only 1 wide bridge in each of these stations, it becomes crowded for commuters also to use the bridges. This is one of the main reasons that commuters prefer crossing tracks,” said Madhu Kotian, president, Mumbai Rail Pravasi Sangh.

Meanwhile, Diva Station has logged 40 incidents of crossing tracks. Despite having a (FOB), Diva daily has a crowd of people crossing tracks. “The existing foot over bridge is narrow and becomes crowded during peak hours. Many prefer to cross tracks as many times the railway crossing itself is opened for vehicles. As there are mail trains as well that ply along this route at a faster speed than local trains trespassers here are prone to injuries and deaths,” said Siddhesh Desai, general secretary, Mumbai Rail Pravasi Sangh.

CR is unable to build fencing near the tracks as the road over the bridge is long pending so vehicles use the railway crossing at Diva. “We are looking at a short-term solution so that the gate at Diva can be closed by March. Moreover, the work of the road over the bridge is underway and a plan to build another (FOB) is in the pipeline. This will make it convenient for commuters to exit railway stations without crossing tracks,” said Rajnish Goyal, divisional railway manager, CR.

“One of the most prominent areas of trespassing is near shanties. In most places, the land adjacent to the railway line has illegal encroachments. Those residing here prefer crossing the tracks to reach the platform or to cross over to the other side. They are carefree people and some end up falling prey to an approaching train,” added Desai.

CR officials have appointed personnel to ensure tracks are not crossed. “Wherever possible, fencing is completed, including between the tracks. We also have posters and awareness-related announcements at stations and trains at regular intervals,” said a senior officer from CR.

Meanwhile, according to sources, there are 4100 accident cases on Central Railway pending in the tribunal to get justice. Commuter organisations want the railways to adopt the system followed in Metro. “Only those with a valid ticket are allowed to enter the premises. This helps ensure no cases of death or accident due to crossing of tracks occur. The suburban local train system was built by Britishers at a time when the population and services were fewer. It is time that this outdated public transport system is upgraded,” added Kotian.