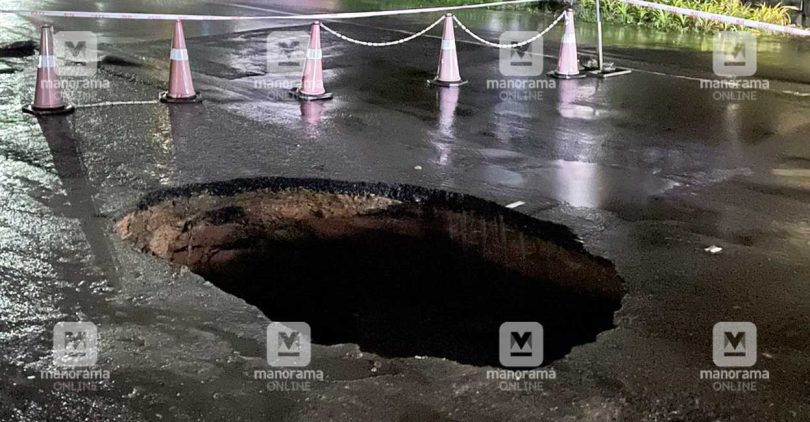 Ernakulam: A crater has formed on the approach road to the Muvattupuzha Bridge on MC Road in the wake of heavy rains. Traffic is now regulated through the century-old bridge across the Periyar.

The crater is wide enough to suck in medium-size vehicles.

Experts are set to assess the stability of the road. It is suspected considerable swathe of earth gave away below the road, resulting in the gaping hole.

The India Meteorological Department (IMD) issued a red alert in all the districts of the state barring Thiruvananthapuram, Kollam, Pathanamthitta and Kasaragod, for August 2 and 3 and has predicted heavy rainfall in the state till August 5.

The heavy rains led to six deaths — one each in Thiruvananthapuram, Kottayam and Ernakulam districts and three in Kannur district — resulting in a total of 12 rain-related casualties in the state from July 31 till date, the Kerala State Emergency Operations Center (KSEOC) said.


Besides that, three people have also gone missing from various parts of the state during the day, it said.

In view of the heavy rainfall and anticipating landslides, flash floods and other disasters, the state government opened 95 relief camps across Kerala where 2,291 people have been relocated, KSEOC said.