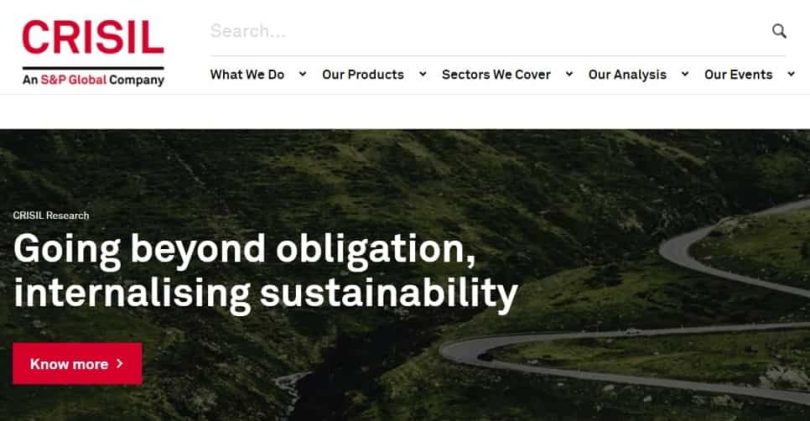 Rating agencies Crisil and Icra on Monday revised down their India growth projections for the current fiscal and the second quarter mainly due to the ripple effect of slowdown in global growth and mixed crop output.

Crisil downgraded the India growth forecast by 30 bps to 7 per cent while Icra pegged the economic expansion at 6.5 per cent for the second quarter of FY2022-23.

“We have revised down our forecast for real gross domestic product growth to 7 per cent for fiscal 2023 from 7.3 per cent, primarily because of the slowdown in global growth that has started to impact our exports and industrial activity. This will test the resilience of domestic demand,” Crisil chief economist Dharmakirti Joshi said in a note.

Aditi Nayar, his counterpart at Icra, in her report pencilled a 6.5 per cent growth in Q2 of the current fiscal, nearly half of the year-ago quarter when the economy had clipped at 12.7 per cent, but which is still a tad higher than the monetary policy committee’s September forecast of 6.3 per cent and at 6.5 per cent in gross value added (GVA) less than half of 13.5 per cent a year ago.

She attributed the lower numbers to the mixed crop output trends revealed by the advance estimates of kharif production, adverse input cost movements for certain sectors with a higher fuel intensity, as well as the impact of the flagging external demand on non-oil merchandise exports, which whittled down the gains from robust demand for contact-intensive services, healthy capital spending by government and pre-festive season stocking of goods.

She also said, however, GDP growth over the pre-Covid levels is expected to double to around 8 per cent in Q2 relative to 3.8 per cent seen in the previous quarter. The agency estimates the sectoral growth in Q2 to be driven by the services sector (9.4 per cent), with a subdued trend foreseen for the industry (2 per cent), and agriculture, forestry and fishing (2.5 per cent).

Joshi said he is paring growth forecast only by 30 bps as domestic demand still remains supportive, helped by a catch-up in contact-based services, government capex, relatively accommodative financial conditions, and overall normal monsoons for the fourth time in a row.

But Joshi warned that the ripple effect of the global slowdown will be felt more next fiscal, which will put domestic demand under pressure as interest rate hikes get transmitted more to consumers, and the catch-up in contact-based services fades.

“Consequently, we expect GDP growth to slow to 6 per cent in fiscal 2024, down from 6.5 per cent estimated previously, with more downside risks to the revised forecast, Joshi said.

Despite the markdown in near-term growth, the country is expected to remain a growth outperformer over the medium-run, he said, and expects GDP growth to average 6.6 per cent between fiscals 2024 and 2026, compared to the 3.1 per cent global growth forecast by the International Monetary Fund.

Joshi sees stronger domestic demand (private consumption constitutes as much as 57 per cent of GDP) driving growth premium over peers in the medium-term on the back of optimistic investment prospects given the government’s capex push, the progress of production-linked incentive scheme, healthier corporate balance sheets, and a well-capitalised banks with low NPAs.

The country is also likely to benefit from China-plus-one policy as global supply chains get reconfigured with shifting focus from efficiency towards resilience and friend shoring.

Noting that falling exports have affected domestic industrial momentum (for the first time in more than two years exports plunged over 25 per cent in October) the IIP has been on a falling trend since July 2022 for export-linked sectors. The hit to industrial activity could intensify in fiscal 2024, as aggressive rate hikes in the US and the EU reach closer to consumers, Joshi warned.

Though Nayar attributed the sharp likely growth deceleration in Q2 to the high base effect in the year-ago period, she estimates Q2 sectoral growth also losing steam with the best numbers are from the services sector at over 9.4 per cent, and the industry popping up subdued numbers with around 2 per cent and agriculture, forestry and fishing failing by a wider margin chipping in with a likely 2.5 per cent growth.

Travel-related services have recorded a healthy recovery since the onset of FY23, benefitting from pent-up demand related to corporate travel and increasing confidence for availing leisure services amid the decline in trajectory of pandemic infections, she said.

As many as nine of the 16 services sector high frequency indicators saw double-digit expansion in Q2.

Manufacturing growth or IIP was a modest 1.4 per cent in Q2, dragged down by the weak external demand, and subdued domestic demand for consumer durables amidst elevated input costs and fuel inflation, she concluded.