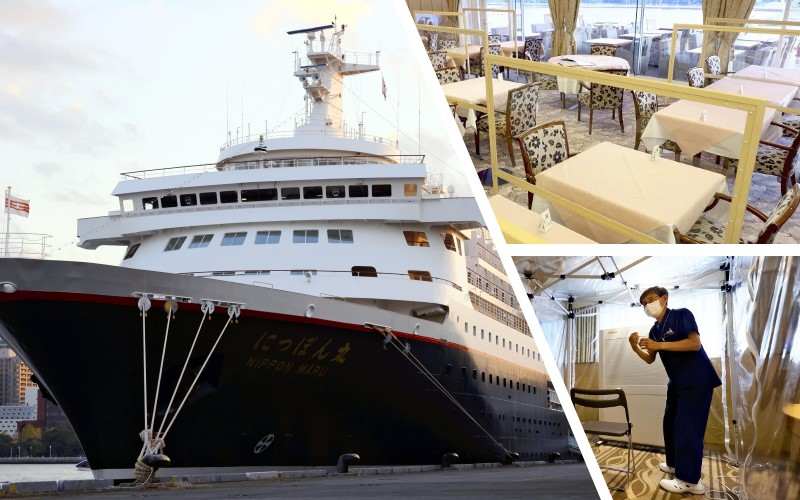 International cruises out of Japan will restart next month after having been suspended since March 2020 following a coronavirus outbreak on the Diamond Princess cruise ship in Yokohama.

Japan will also reopen its ports to international cruise ships from March next year. While ports and related businesses are happy with the development, it also means an additional burden on host municipalities, which will have to implement their own thorough infection control measures in addition to those of the cruise lines.

Stricter on the sea

“Passengers who develop COVID-19 symptoms are examined in this room,” a doctor attached to the Nippon Maru, currently moored in Yokohama, said on Nov. 18 as he presented an examination room that had been converted from a guest room, in part by creating negative pressure to keep the virus from spreading.

The Nippon Maru, operated by Mitsui O.S.K. Passenger Line, Ltd., is one of the most luxurious passenger ships in Japan, equipped with about 200 guest rooms, restaurants, a casino lounge and a swimming pool. On Dec. 15, the ship will embark on a 48-day round-trip journey from Yokohama Port to the Indian Ocean island nation of Mauritius for its first cruise overseas after the restart.

Although services will not be quite the same as those offered on pre-pandemic cruises — with the capacity to be limited at restaurants and the public bath, and the entertainment on ship to be changed in order to prevent infections — the Nippon Maru has seen strong bookings, with about 80% of its target filled, the company said.

The ship is equipped with PCR testing facilities, and it will be possible to test crew and passengers as needed. Those who test positive will be moved to one of 17 isolation cabins and then, as a general rule, disembarked at the next port of call for treatment.

Infected passengers will be treated at the facility designated by the country where the ship docks. If there is no designated facility, Mitsui will help with hospital and hotel arrangements. The company recommends passengers buy international travel insurance, otherwise they will have to pay out of pocket for medical treatment and to return home.

If 10% of the crew and passengers aboard test positive, the ship will shorten its itinerary and return early to Yokohama Port.

“We take tougher safety measures on board than they do in cities. We want our guests and those at our ports of call to feel safe,” the Nippon Maru general manager said.

Cruises abroad effectively came to a halt in March 2020 when the Japanese government requested operations be suspended for passenger ships transiting through China and South Korea. The request was lifted in October this year, and the NYK Group’s Asuka II will set sail on an overseas trip in February next year. From March next year, 166 foreign ships are scheduled to call at Japanese ports.

Tokyo spent about ¥39 billion to build its Tokyo International Cruise Terminal to replace the old Harumi Passenger Ship Terminal, which had height restrictions for large ships. The new terminal opened in September 2020, but the pandemic has kept the terminal from as yet having any international cruise ships call at the port, despite expectations of 100 such ship calls per year.

International cruises were booming before the pandemic, with 2.52 million foreign visitors arriving in Japan on cruise ships in 2017. Popular destinations included Naha, Hakata and Nagasaki. According to the Japan Tourism Agency, the economic effect of port calls for tourist consumption alone comes to about ¥80 billion a year.

Cruises had been suspended worldwide due to the pandemic, but gradually resumed in Europe from July 2020. Cruise lines are now operating in more than 80 countries.

Reopening ports in Japan will require thorough preparations against the novel coronavirus.

When an infection cluster occurred inside the Diamond Princess in February 2020, 712 of the 3,711 crew and passengers on board were infected, and 13 of them died. Delays in testing and the long periods of time many passengers were kept on board received international criticism.

In preparation for the restart of cruises, the Japan International Cruise Committee, along with other entities, compiled COVID-19 prevention guidelines. Vessels calling at domestic ports will be asked to abide by the following: At least 95% of passengers should have received two doses of vaccine, with three doses for all crew members; COVID-19 patients on board should be isolated, and all crew members should undergo health checks; the ship should refrain from calling at domestic ports if 10% or more of the people aboard are infected.

Depending on the situation, patients may need to be treated on land, so cruise lines are asked to consult with relevant municipalities in advance.