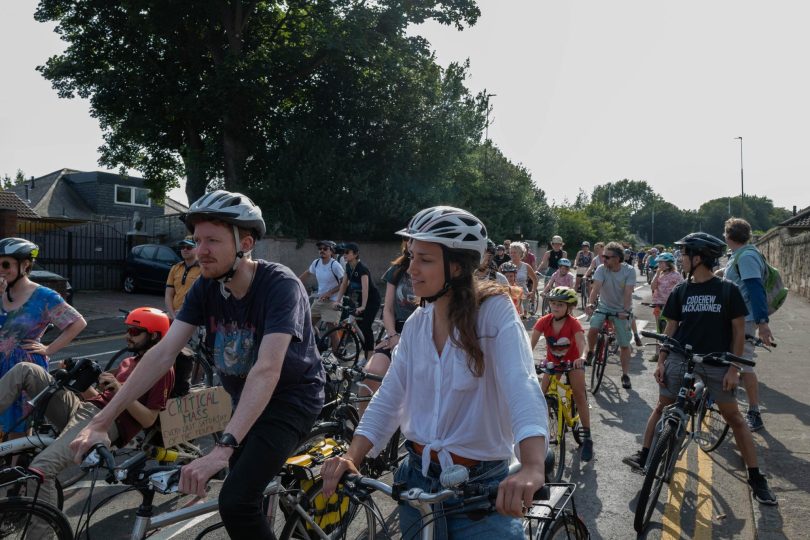 Let us know what you think and join the conversation at the bottom of this article.

The protest, organised by Critical Mass Edinburgh, will block off main roads in the city with hundreds of bicycles, and other people-powered machines.

In a bid to ‘reclaim’ spaces for cyclists and fight for safer conditions on the roads the group will kick off at the Meadows, through Causewayside, Morningside and Bruntsfield finishing up at Bristo Square.

The i newsletter cut through the noise

It follows the Critical Mass cycle for COP26 which saw 400 riders get on their bikes and pedal from Edinburgh to Glasgow to highlight cycling as a solution in tackling climate change.

The mass ride comes as Scotland reported an 18 per cent increase of accidents on the roads involving cyclists.

Cyclists from across the city including families and people with disabilities will join the protest which will block cars travelling through them.

Cyclists want cleaner, greener and safer roads for all users.

Around 20 people took part when the mass rides first started in the capital last summer but organisers say hundreds now join the popular monthly rides which can see them going through red lights.

On their website Critical Mass states: “It is sometimes necessary to ride through red lights in order to maintain the group’s unity. If the group is significantly large and the green light sequence is too short to get everyone through, it is actually safer to behave this way, as other vehicles are less tempted to try to weave in and out among smaller groups of riders.”

Organiser Dan Abrahams, an engineer, said the protests are safe and open to all ages and abilities.

Pedal-power: The green alternative to travelling in and around Edinburgh.

He said: “We are not blocking traffic. We are part of that traffic. I cycle to work every day and am desperate to see change. The city is not safe for cyclists, it can be an absolute nightmare in parts. People have complaints about Spaces for people which I understand but it’s a start though it is still quite disjointed. Critical mass is about reclaiming the streets to help make them a safer space for anyone that cycles or wants to. Cycling is a big part of solution to climate change and has so many benefits for physical and mental health. Yet right now the balance is still tipped to cars.

“It is a protest but it’s not a major disruption for cars. They might be held up. But this is a process and desperate times call for desperate measures. We won’t help bring change unless we turn up in person and make a clear point about asking for it. I think most motorists get it. We are sorry for any inconvenience caused but we need to find a way to say look, things need to change for the better.”

“It’s liberating to cycle in a big group and feel that safety of being surrounded by others on bikes. There are all kinds of cyclists who join us. Activists, families, people with disabilities. For most people I think they come because they want to help make the streets safer, get better cycling infrastructure in the city and to see more people confident enough to get on their bikes.”

The Critical Mass movement started in San Francisco in 1992 and has grown to over 300 critical mass rides over the world.

Cycling is seen by many forward-thinking city planners as the only viable future.

A message from the Editor:

Thank you for reading this article. We’re more reliant on your support than ever as the shift in consumer habitsbrought about by Coronavirus impacts our advertisers.

If you haven’t already, please consider supporting our trusted, fact-checked journalism by taking out a digital subscription.