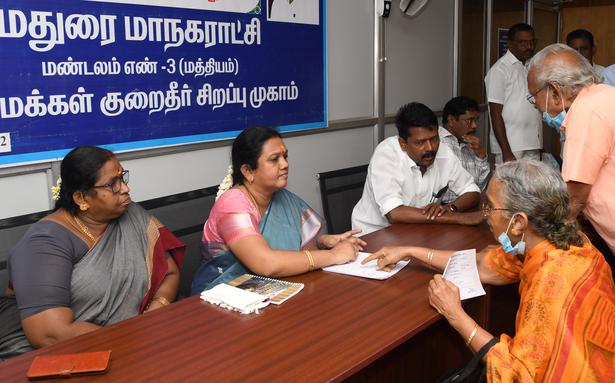 Overflowing sewage and garbage filled streets across the central zone of Madurai Corporation are the issues that pose problems to commuters day and night, said residents at the weekly grievance redressal meeting here on Tuesday. They were accompanied by the Councillors.

Doraisamy Nagar People’s Welfare Association secretary R. N. Ilangovan charged that the petition, submitted two months ago, to at least temporarily fix roads in their area that were dug up to lay underground drainage pipelines had not been redressed until now.

“The authorities appear callous. Why were even the roads dug up without constructing a pumping station, the work of which has been abandoned for months now? Contractor and authorities state that there are no funds which is unacceptable,” he said. The association members, along with the DMK Councillor T. Amutha, also aired their grievance that faulty street lights were leading to frequent crimes in their area.

DMK councillor of ward 61, S. Selvi, accompanied by residents and members of Velmurugan Nagar Kudiyirupor Nala Sangam demanded installation of street lights at the earliest. “The lights used to burn during the day and not at night, now it has been dead for months,” complained R. Senthilkumar, secretary of the association.

The petitioners were assured that the tenders for street lights were floated and the repair works would be taken up soon. Going one step ahead, members of Jegan Homes’ Welfare Association in ward 70 sought installation of CCTV cameras under ‘Namakku Naame’ scheme, citing the rise in theft at Ellis Nagar.

DMK Councillor of ward 54 I. Noor Jahan highlighted the pressing need to clear the overflowing sewage on first and third Kazimar Street. “Residents, who are fuming over the persistent stench and unhygienic condition are ready to stage protests,” she added. A few women residing in Ellis Nagar followed suit and raised the same issue.

A few traders of West Marret Street urged the panel to remove the steel railing installed on one side of the street that has no punctuated openings anywhere. Submitting photos of the barricades, the traders said that despite their opposition they were installed two months ago under the Smart Cities Mission which was affecting their business.

“No railing of this sort has been installed anywhere, even in the nearby West Veli Street. The authorities had left ample space in front of big banks alone. Why are we alone left to suffer?,” they charged and alleged that schoolchildren jumped over the railing, in which a girl sustained head injuries last week.

DMK Councillor of ward 76 R. Karthick, along with members of Tamil Puligal Katchi, put forth their demand to clear up the piling garbage near the housing board unit comprising over 1,000 homes at Mela Vasal Street. The Mayor promised to take up a mass cleaning campaign at the earliest.