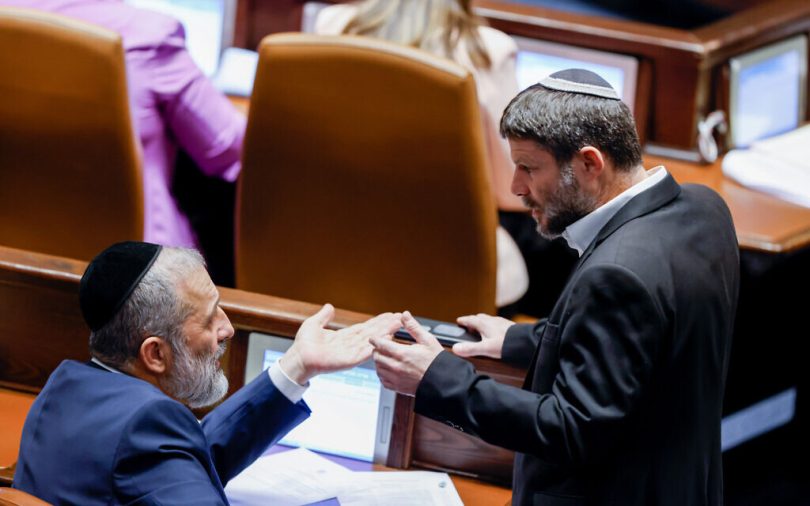 Passing 63 to 55 on its final vote, the law is the second to finalize in a three-part legislative blitz, following last week’s passage of a Likud-backed law to make it harder for rebel lawmakers to break away from their Knesset factions. Demanded by Otzma Yehudit chief Itamar Ben Gvir, a third bill is set to expand political authority over Israel’s police leadership and policy, and is expected to come for its final votes as early as Tuesday afternoon.

Although combined into a single bill to change Israel’s Basic Law: The Government, the now-finalized amendment tackles two separate issues regarding incoming ministers Smotrich and Deri.

First, it makes it possible for Smotrich to be appointed as an independent minister within the Defense Ministry responsible for overseeing Israeli and Palestinian building in the West Bank’s Area C, an area under full Israeli civil and military control that is home to nearly 500,000 Israeli settlers and over 300,000 Palestinians.

While additional ministers have been appointed to ministries in the past, they have generally required a specific, temporary law to create their position, accompanied when necessary by government directives laying out their responsibilities.

For example, from 2020 to 2021 Michael Biton served as a minister in the Defense Ministry, under his party leader and current Defense Minister Benny Gantz. Biton was in charge of civil and social affairs and had his responsibilities clearly delineated in a government order.

The Smotrich provision, for the first time, creates a permanent appointment mechanism, and does so without an accompanying government directive, as it is preceding the government’s formation.

Smotrich will also serve under presumed incoming defense minister Yoav Gallant, from Likud. And his responsibilities, loosely carved out by an annex to Religious Zionism’s coalition deal with Likud, touch military appointments and sensitive West Bank building, and thus intersect with the defense establishment’s operational capabilities.

A staunch settlement supporter, Smotrich has pressed to extend Israeli sovereignty over the West Bank, in line with religious and security ideology centered on maintaining Jewish control over Biblical Israel.

Doing so would test Israel’s self-definition as a Jewish and democratic state. Either Israel would threaten its Jewish demographic majority by incorporating nearly three million West Bank Palestinians into the state, or its democratic values by not granting them full citizenship. 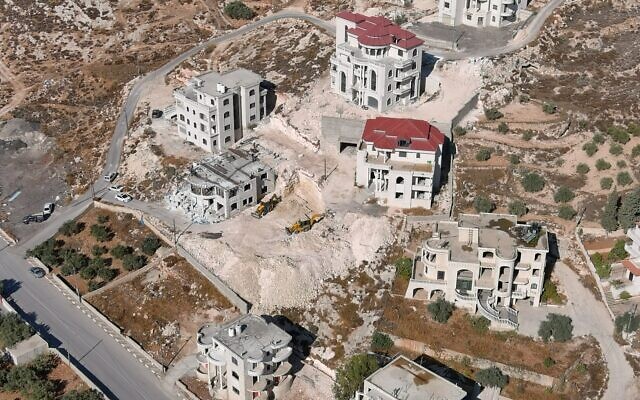 Aerial photo of what the Regavim organization claims to be illegal Palestinian construction in Area C of the West Bank. (Courtesy Regavim)

In addition to his presumed placement as an independent settler minister in the Defense Ministry, Smotrich is slated to become finance minister, which he is expected to rotate to Deri half-way through the government’s term.

Deri in January received a suspended sentence for tax offenses. As part of a deal made with the court, the Shas leader quit Knesset before sentencing to avoid deciding whether his offenses carried moral turpitude, a distinction that would have barred him from politics for seven years.

At the time of sentencing, Hebrew media reported that Deri and the court had the understanding that moral turpitude would be revisited if he aspired to once again hold senior public office. 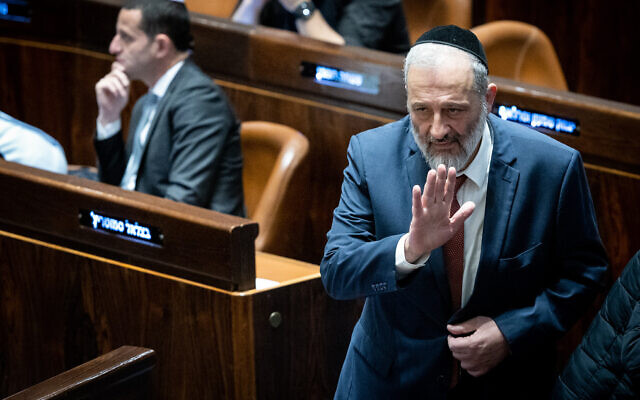 However, the legal change made on Tuesday obviated that requirement by changing ministerial fitness standards. The amendment changes the Basic Law to only explicitly demand a moral turpitude determination for custodial prison sentences.

Had the “custodial” addition not been made, Deri’s case would have been referred to the Central Elections Committee for a moral turpitude determination, in line with the original reading of the Basic Law and an opinion from the attorney general on the matter. 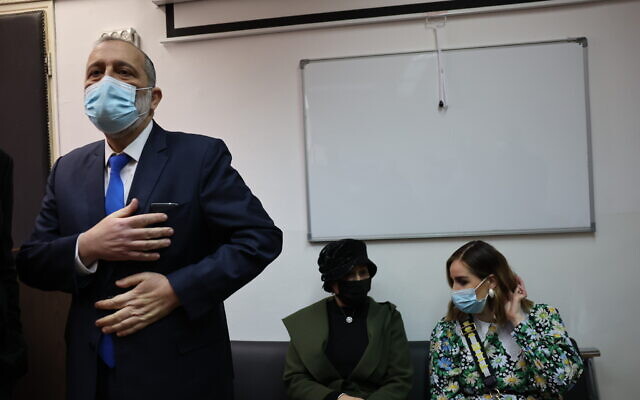 Former MK Aryeh Deri, leader of the Shas party, arrives for a hearing at the Jerusalem Magistrate’s Court on January 25, 2022. (Yonatan Sindel/Flash90)

Instead, Deri is promised to simultaneously hold the interior and health ministries, before swapping Smotrich as finance minister.

Critics of the change, including the Knesset’s legal adviser, attacked this law as “personal” and inappropriately legislated specifically for Deri.

The Movement for Quality Government in Israel on Sunday petitioned the High Court of Justice to block Deri’s ministerial appointments, on the grounds that Deri mislead the court about his intention to leave political life when striking his plea deal earlier this year. On Monday, the court ruled that the petition was “premature” and that it would not block Deri from taking his government seats on Thursday.