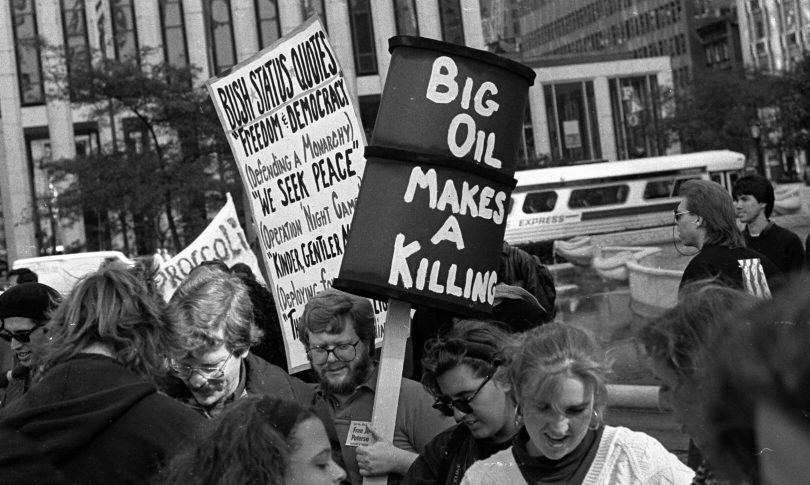 The quarterly profits of oil companies don’t usually attract a lot of attention outside Wall Street, but this time is different. That’s because the oil and gas “supermajors”—meaning the world’s largest publicly traded oil and gas companies—are posting record profits at a time when people around the globe are straining under the pressures caused by inflation, including high gas prices. Many of us by now have heard the reasons for this deluge of petro-dollars: tightened supply caused by factors such as the war in Ukraine, exacerbated by increased demand as COVID lockdowns lift. The fact that these painful conditions benefit an industry estimated to make nearly $3 billion in profits each day adds insult to injury.

Though the supermajors haven’t asked our opinion on how to avoid the public rage these profits incite, we’re going to offer advice anyway, since these companies are historically challenged in this department. Our do’s and don’ts for spending an oil-tinged windfall:

DON’T: Invest in new exploration and infrastructure that flout global carbon-reduction targets. All four oil majors publicly claim to support the Paris Agreement’s goal of keeping the global temperature increase to 1.5 degrees Celsius above pre-industrial levels. That requires bringing global energy-related carbon dioxide emissions to net zero by 2050. To meet that goal, the International Energy Agency’s Net Zero Roadmap released in 2021 says no new oil and gas supply projects can come online. But a March 2022 analysis from the investor consortium Climate Action 100+ determined that no major oil company was on track to meet the Paris goals. Meanwhile, annual reports show corporations are pushing ahead with plans to expand production, betting on new technologies to somehow make it all okay in the future.

DO: Pay your fair share of the costs of climate change. Companies are spending millions fighting lawsuits that would hold them accountable for the costs that fossil fuel extraction has imposed on people and the planet. Chevron alone is facing a $9.5 billion penalty levied against the company by an Ecuadorian court for damaging the Amazon rain forest; 21 suits brought by U.S. cities, counties, and states over climate damages and deception; and 39 cases brought by seven coastal parishes and the State of Louisiana seeking damages for coastal erosion around oil fields. There will be more costs down the road for fixing orphaned wells and retiring old assets—costs companies have tried to foist on taxpayers in the past. CEOs should take responsibility for their fathers’ sins of denial and deception and direct their CFOs to sock away profits for the rainy day when those bills come due.

DON’T: Keep increasing shareholder buybacks. Publicly traded corporations buy shares back from investors when they have extra cash in order to keep shareholders happy, and oil companies have embarked on an aggressive buyback program since the big profits began rolling in. The House Oversight Committee found that BP, Chevron, ExxonMobil, and Shell handed out more than $44 billion in stock buybacks and dividends when profits started to rise last year, and those numbers are only going up: in April, ExxonMobil upped its buyback program from $10 billion to $30 billion through 2023. That $2 billion per year in low-carbon spending is looking smaller all the time.

DO: Dramatically increase your investment in renewable energy. “High energy prices are largely a result of underinvestment by many in the energy industry over the last several years and especially during the pandemic,” said ExxonMobil in a statement on its huge profits. We agree! ExxonMobil is tragically under-invested in the types of energy that will liberate consumers from the boom-and-bust oil cycle. In a January 2022 report on its climate plans, ExxonMobil pledged to direct $15 billion toward emission reduction efforts over the next six years, but that $15 billion breaks down to $2.5 billion per year—less than 2 percent of ExxonMobil’s annual revenue, and far less than its profits from just the last three months. Further, these efforts are focused on carbon capture and storage, hydrogen, and biofuels—technologies that aim to stash carbon emissions away, not reduce their production. Meanwhile, ExxonMobil is moving ahead with development of 12 million tons per year of liquefied natural gas and plans to keep its current assets in production, and other supermajors are planning more of the same. Yet the future is clearly one dominated by renewables, not these fossil fuels, as evidenced by the pending Senate bill that will direct hundreds of billions of dollars to boosting clean energy with initiatives like tax breaks for electric vehicles and solar panels. That’s the gravy train the supermajors should ride.

DON’T: Plow money into more disinformation and climate obstruction. Oil and gas companies, as well as the trade associations that do their bidding, have made significant investments in climate obstruction. An analysis by the House Committee on Oversight and Reform found that of the $452.6 million BP, Chevron, ExxonMobil, Shell, and the American Petroleum Institute spent lobbying the federal government since 2011, the vast majority was directed at obtaining tax breaks, while almost nothing was spent on carbon pricing legislation, which the companies publicly claim to support. A ranking by the nonprofit organization Influence Map of the 50 most influential corporations and industry associations blocking global climate action put ExxonMobil, Chevron, and API at the top. They haven’t been completely successful, as the new bill demonstrates, though they worked hard to fight its corporate tax increases.

Dear CEOs, we offer this advice because these profits offer an opportunity for a supermajor course correction that would save future generations pain while keeping your business relevant in the carbon-constrained future. You’re welcome.