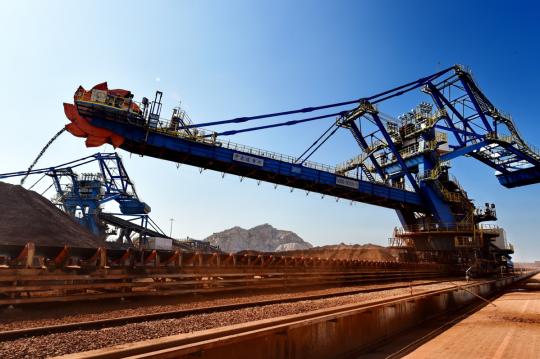 Iron ore is moved by a giant crane at a port in Meizhouwan of Quanzhou, Fujian province. (Photo/Xinhua)

China will need to enhance research into deep Earth sciences to fulfill some of the country’s biggest strategic needs, from finding and utilizing underground resources to predicting and mitigating natural disasters, experts said.

“Deep blue” refers to fields related to computer science and information technology, such as cyberspace security and artificial intelligence, according to the Ministry of Science and Technology, while deep Earth consists of geology, mineralogy, seismology, geothermal energy and other sciences related to understanding the Earth’s internal structure and utilizing its resources.

Compared with the other three frontiers, deep Earth exploration is a relatively obscure field, given the enormous resources, manpower and technological ingenuity needed to penetrate the Earth’s crust, experts said. But since the mid-20th century, more countries are now aware of the strategic importance of this field.

Liu Jiaqi, a geophysicist and an academician of the Chinese Academy of Sciences, said deep Earth sciences are closely related to the ability to tap into Earth’s mineral and energy resources. They also play a key role in environmental protection and mitigating the risks of natural disasters, such as earthquakes and volcano eruptions.

“It is a science about supporting and sustaining life on Earth. Without it, we cannot thrive,” he said, adding that China’s long-term economic prosperity depends heavily on the supply of fossil fuels and basic raw ingredients, all of which are created via complex geological activities and extracted from the ground.

Xu Yigang, a geochemist and a CAS academician, said China attaches such great importance to deep Earth exploration because the country needs to curb its overreliance on importing iron, copper, nickel, oil and natural gas.

“Therefore, we need to strengthen our basic research into deep Earth sciences so that we can find and mine the resources our country needs,” he said.

Taking iron ore as an example, many of the world’s largest and most accessible iron ore mines are in Australia, Brazil and Russia, according to the Ministry of Commerce. Although China has the world’s fourth-largest crude iron ore reserves, most of the ore is deep underground and too costly to mine and process.

As a result, China has had to import nearly 80 percent of its iron ore since 2011, the ministry said, adding that the country has also been the world’s biggest importer of copper and nickel for years, fueled by the country’s rapid development in stainless steel, construction and electronics.

The lack of self-sufficiency in these raw ingredients means Chinese industries are strongly affected by price fluctuations. On May 12, the price of iron ore surged to a record $237.57 per metric ton, prompting the China Iron and Steel Association to take measures to curb the rising price and ensure stability of the supply chain.

Luo Tiejun, vice-president of the association, warned at a conference in December that the price of iron ore had been climbing rapidly in 2020, which surpassed industry expectations and introduced new risks and instabilities to the economy.

Since the 1960s, drilling deep boreholes has been a crucial scientific tool for investigating the evolution, composition and physical movement of Earth, according to the International Continental Scientific Drilling Program.

As a result, scientists often dub these boreholes “telescopes into Earth”.

In 2005, China completed its first continental scientific borehole, reaching 5,158.2 meters below the Dabie-Sulu continental collision zone in eastern China, according to the China Geological Survey. This feat made China the third country in the world, after Russia and Germany, to drill deeper than 5,000 meters.

The deepest borehole to date is the 12.2-kilometer Kola Superdeep Borehole in Russia. However, Liu said this depth is barely scratching the surface when it comes to exploring the internal structure of Earth, which has a radius of more than 6,370 kilometers.

In recent years, China has intensified its research into probing the Earth, Liu said. In 2009, the Ministry of Land and Resources, the predecessor of the Ministry of Natural Resources, launched a research initiative dedicated to deep Earth drilling technologies. This was followed by another major research program by the Ministry of Science and Technology in 2016 that focused on extracting underground resources.

Chinese scientists are also planning a new deep Earth science research project, with hopes it will be added to the nation’s list of Science and Technology Innovation 2030－Major Projects, which currently includes 16 objectives ranging from brain sciences to artificial intelligence.

Last year, the Chinese Academy of Sciences and the National Natural Science Foundation of China kicked off a long-term research program for frontier deep Earth sciences that runs from 2021 to 2035. It combines Earth sciences, biology, meteorology and other disciplines to fulfill China’s major strategic development needs.

According to the China Geological Survey, China’s geography is estimated to hold a massive amount of mineral deposits at a depth of around 2,000 meters, including a treasure trove of gold, zinc, antimony and rare earth elements. But most of China’s mining operations are less than 500 meters underground, with fewer than 20 mines that can surpass 1,000 meters.

Xu said China will need to greatly enhance its ability to survey and access its underground resources, which will require domestically developing new advanced equipment and technologies.

“Right now, most of our survey tools are imported. If other countries decide to block our access to this equipment, it would severely undermine our country’s resource and energy security,” he said.

The Ministry of Natural Resources said China is focusing on making new breakthroughs in mining ore deposits at the depth of 1,500 meters, while surveying for new resources at 2,000 to 3,000 meters.

Liu said that, besides the drilling of boreholes, volcanoes can be another way of indirectly studying the internal structures of Earth. “Our planet is like a living entity. Volcanos are its nostrils, magma is its blood and tectonic movements are its pulses.”

In addition, regions around volcanoes can potentially hold large amount of ore deposits, precious metals and gems, Liu said. Volcano ash is also very fertile due to its abundance of nutrients.

When lava rich in magnesium and iron cools, it creates basalt. This can be turned into basalt fiber, which has huge industrial potential, since it has many properties more advantageous than fiberglass but is also significantly cheaper than carbon fiber.

Therefore, the scientific community has hailed basalt fiber as a new green material for the 21st century. Although the global basalt fiber industry is small, it is growing rapidly, with projections that it will increase from $227 million in 2019 to $397 million by 2024, according to global market research firm MarketsandMarkets.

Liu said the discovery and development of basalt fiber is an example of deep Earth sciences offering new solutions for industries that require high-performance fiber materials, such as aerospace technologies.