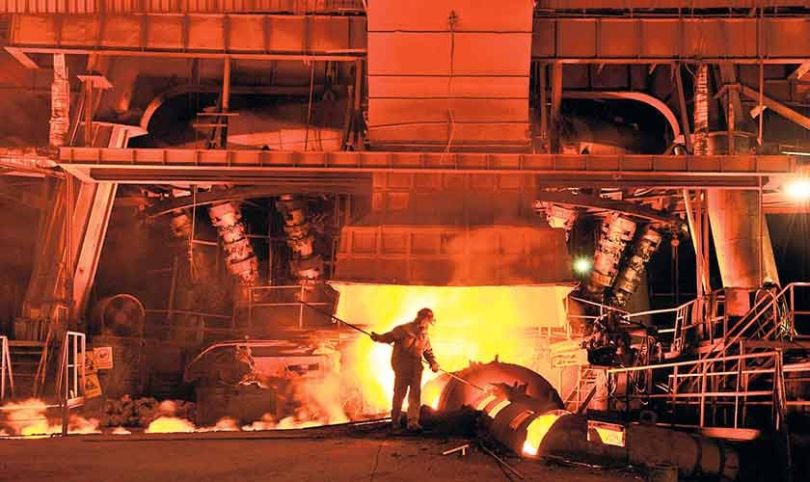 Engineering industry, which includes production of iron& steel, machinery & equipment, electrical & electronic goods, and transport vehicles, is in a shambles, and its performance is persistently declining due to a variety of factors.

Pakistan Steel Mills, the only large integrated steel mills, with annual designed capacity of 1.1 million tons to produce a variety of iron and steel products, remain inoperative since June 2015 under controversial circumstances, and, understandably, has accumulated losses in hundreds of billions of rupees. The latest efforts to privatize and revive Pakistan Steel has been unsuccessful, it seems, and there is no visible headway by the government in this direction. Plans drawn since 1990s for capacity expansion of Pakistan Steel Mills to 3 million tons annually never materialized, whereas existing mills is in a state of disrepair.

The only other large steel mills Aisha Steel Mills, established in 2005 in private sector, has now an installed capacity of producing 0.7 million tons of cold rolled coils annually, but its production capacity is under-utilized. There are around 173 steel rerolling mills operating across the country in organized sector, which are generally devoid of employing modern techniques, and are currently facing liquidity crunch. China had plans to setup a steel & metal recycling plant in Gwadar by 2025 under the CPEC framework, but the project has not taken off as yet. According to the World Steel Association, total production of crude steel in Pakistan was 5.283 million tons in 2021 whereas imports amounted to 3.063 million tons in that year to meet demand-supply gap.

Pakistan imported iron & steel valuing $3.817 billion in 2021 as per the Government of Pakistan statistics. In addition, iron & steel scrap was imported amounting to 4.720 million tons in 2021, which also speaks of poor state of domestic ship-breaking industry. Demand of steel is likely to continue its upward trend therefore over the next few years, speculated to grow at around 20 percent year-on-year if all the ongoing and planned mega dam, energy, construction & infrastructure projects are implemented as scheduled. This will require substantial imports of steel, in quantity and value, given the present conditions of domestic steel industry. Iron and steel industry is rightly termed as backbone of infrastructure of any country, and therefore holds the key to sustained growth of Pakistan economy, but somehow it has received the least priority in the government policies.

Performance of the manufacturers of capital goods is lackluster too. The giant engineering industrial units in public sector, namely Heavy Mechanical Complex (HMC-1), Heavy Foundry & Forge (HMC-2) and Pakistan Machine Tool Factory (PMTF) having been transferred to the strategic organization are hardly manufacturing any commercial goods. Product range of the prized national asset HMC Complex includes complete sugar mills and cement plants but it has neither delivered nor has order in hand for supply of a single plant since long though various cement plants, in particular, are being established. Historically, its other products include road construction machinery, cranes & other material handling equipment, industrial boilers, railway equipment, and a variety of steel structures, castings and forgings. Later additions to HMC product range included equipment for thermal & hydropower plants, fertilizer & chemical plants, and for oil refineries. Nonetheless, at present HMC order book is too narrow.

Known for manufacturing and marketing of high-quality machine tools of international standards, PMTF has no current orders for machine tools, neither conventional nor sophisticated CNC, which include milling machines, lathes, turning centers, and drilling machines. In recent past, the factory had closed down its operations due to financial and administrative issues in the wake of privatization process that continued for almost two decades without any result. It also manufactured automotive transmission and die-cast parts. Under these conditions the industry now depends largely on imports to meet the demand of high-precision, high-speed conventional and CNC machine tools. Machine tools manufactured in private sector are not precision machines and are not of international quality, in general.

On the other hand, Heavy Electrical Complex (HEC), manufacturer of power transformers in public sector, has been privatized in February, after a prolonged divestment process. But there are still pending issues to be resolved by the government requiring its successful transfer to the new owners who, obviously, could not recommence operational activities as yet. Sadly, the government remains oblivious to the situation and has not taken corrective measures. Long process of divesting the company has played a dominating role in making it a sick unit and its production capacity remained grossly underutilized. However, there are two reputed manufacturers of power transformers in private sector to fill the demand-supply gap to some extent.

The pioneering engineering enterprise Pakistan Engineering Company (PECO) at Lahore, a public limited company, has ceased its operations since 2019, and a winding-up petition is said to be in process. The cash-starved company, which has been partially and progressively divested by the government over a period of years, had been marred of late with corruption, embezzlement, illegal insider trading of shares and other malpractices. Reportedly, the Securities and Exchange Commission of Pakistan (SECP) had initiated in March 2021 investigations into the company’s affairs that have not been finalized so far. Once it manufactured a large variety of engineering goods, such as bicycles, textile machinery, machine tools, electric motors, steel rolled products, and electricity transmission towers. Private sector industrial units of light and medium size, mostly in informal sector, are producing and marketing industrial machinery, agricultural implements, pumps, motors, machine tools, electrical fans, surgical instruments etc., though with limited capacity and quality standards.

A strong engineering sector, particularly capital goods industry, is considered prime-mover for achieving economic development as it forms the basis of country’s technological and industrial viability. Engineering goods sector not only creates large-scale employment opportunities, self-reliance, and socio-political uplift providing freedom from exploitation by developed countries, it is also required for development of all other sectors of economy. Indeed, the development of engineering goods industry is synonymous with industrial development. Engineering goods industry, said to be a priority sector under the Strategic Trade Policy Framework (STPF) 2020-2025, was never accorded due attention by the government for its acceleration, promotion and expansion.

The domestic engineering industry, which could support promotion of industrialization and cost competitiveness of other industries, is deprived of utilizing its existing resources of metal producing, design & engineering, and manufacturing to larger extent. On the other hand, opportunity for seeking foreign direct investment has not been explored. There is continuous dependence on imported machinery and equipment, which amounted to $7.093 billion in 2021, whereas total imports under “machinery group” were $10.146 billion. Import substitution could be achieved to a larger level through effective development of engineering sector.

Currently economic outlook of Pakistan faces numerous challenges that could adversely affect its growth in not too distant a future. For the reason of sustainability in the wake of present trade deficit, devaluation of currency, ever-increasing imports and falling exports, there is a serious need to provide a fresh impetus to investments in new areas of manufacturing in particular engineering goods of high-value addition with a long-term perspective.

The writer is retired chairman of the State Engineering Corporation