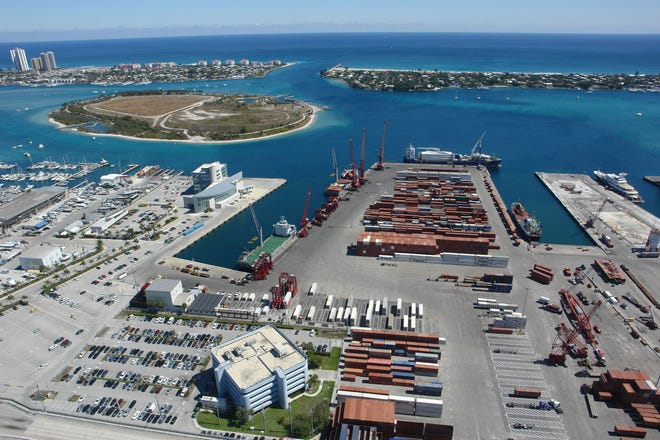 Although it gets little fanfare, the Port of Palm Beach is a potent economic powerhouse, generating $260 million in business revenue and $12 million in state and federal taxes. It employs 56 people, and along with its tenants, supports more than 3,800 direct jobs.

More than $14 million worth of commodities move through the 165-acre port annually – 80% of it in exports, mostly to Caribbean countries. One cruise ship, Margaritaville at Sea Paradise, also is based there.

Governing this special taxing district in what is the fourth busiest of Florida’s 14 deepwater container ports are five commissioners elected at large by voters. Port commissioners meet monthly. They are each paid salaries of $12,500.

And:Abandoned ship at Port of Palm Beach to be sold, likely chopped up for scraps

In Group 4, Doreen Loretta Benson, a Republican, and incumbent Blair Ciklin, a Democrat, have no primary opposition and will face off in the November general election.

In Group 5, Roderick Oliver Clarke is unopposed in the Republican primary and will face the winner of the Democratic primary. It features four candidates – including a write-in aspirant, Sabrina Young, who did not respond to requests for an interview. Another candidate, Varisa Dass, sought to have one opponent, Deandre Poole, booted off the ballot on a technicality. A judge ruled in Poole’s favor.

The Palm Beach Post conducted a criminal background check on port commission candidates, including incumbents. The Post is reporting any criminal charges filed and the outcome of the cases since 2012, even when they did not result in a conviction.

Platform: The most pressing issues, Dass said, are removing the Monarch Countess cargo ship abandoned at the port, looking for ways to attract more tenants and revenue, and developing a succession plan for when the executive director retires next year.

“We’re obviously always going to have land restrictions,” Dass said. “We need to work on implementing the master plan and maximizing use of the limited space that we do have.

“We could look at opportunities where tenants could relocate their spaces,” creating vacancies for new tenants, Dass said. “We need to expand economic opportunities by bringing in, for example, a new cruise line or potential prospective businesses.”

Political background: Dass was appointed by port commissioners to be their representative to a citizen’s advisory committee of the Palm Beach Planning Transportation Agency. She is on the board of the West Palm Beach Downtown Development Authority. She also served on an independent audit committee of the circuit court.

Finances: She has raised $46,490 from 187 contributions as of July 25, many of them from attorneys and family members. Port Commissioner Kathryn Waldron gave $500, former County Commissioner Jeff Koons contributed $1,000 and the political action committee Floridians for Economic Leadership chipped in $1,000. Another PAC, Ruth’s List Florida, gave $250. Dass also has loaned $16,025 to her campaign. Her $20,002 in expenditures includes $16,231 for consultants from Patriot Games Consulting in Wellington, Traub Lieberman in Palm Beach Gardens and Proven Strategies in Riviera Beach.

“We have to look at how the port is allocating and using space,” Poole said. “I would support moving the Port of Palm Beach headquarters across the street from where the port currently sits. There’s a piece of land the port purchased and I will support building a warehouse on that land and putting the port headquarters on top of that warehouse. We could lease out the current headquarters … for top dollar.”

The port is landlocked, Poole noted, but “there is commercial property in the general vicinity of the port. I will support purchasing commercial property and building warehouse space” on it. Then, “We can recruit more port tenants to lease that space” and with them, generate more jobs.

Professional history: Poole is a senior instructor in communication studies in the School of Communication and Multimedia Studies at Florida Atlantic University. He is president of the FAU chapter of the United Faculty of Florida and board secretary for the Scholastic Achievement Foundation of Palm Beach County.

Notable media coverage: Poole was the subject of stories in 2013 when one of his FAU students complained about an assignment in which students were to write “Jesus” on a piece of paper and then step on it. Poole said the assignment had been used by other university professors nationwide, was recommended in an FAU textbook and was to be a lesson on the impact of words and symbolism. FAU cleared him of impropriety after an investigation.

Finances: He has raised $17,190 from 39 contributions. They include $500, $200 and $100 from retired County Commissioners Jess Santamaria, Addie Greene and Priscilla Taylor, respectively; $150 from retired Port Commissioner Peyton McArthur and $500 from former Supervisor of Elections Susan Bucher. The Americans for Liberty and Prosperity PAC gave $1,000 and the Sugar Cane Growers Cooperative in Belle Glade, $500. Poole has loaned his campaign $2,070. He has spent $11,237, mostly on campaign signs, marketing and T-shirts.

Platform: “My number-one priority would be to create more high-paying jobs. I like the idea of port expansion, but I don’t want to expand so much that it’s going to interfere with somebody’s living conditions. In other words, I don’t want to go in and just take a whole neighborhood.”

Although the port has limited land, “there is a lot of storage there we could move offsite and create more space” for expansion. “There’s a lot of property in Palm Beach County. If we have more tenants, more employers, then we attract more jobs.”

Professional history: Whalen is a real estate agent and the owner of M.J. Whalen & Associates. He previously was the finance director for two Palm Beach County corporations, an executive manager for an insurance company and an automotive financial services firm, and the owner of an auto sales company.

Political background: He ran as an independent for the Port Commission’s Group 2 seat in 2020, losing to incumbent Democrat Katherine Waldron. “I’ve been a Democrat all my life,” Whalen said.

Education: He attended an electronics school for one year in California.

Finances: Whalen gave his campaign $6,000, its sole contribution. He has spent most of it, primarily on campaign signs.