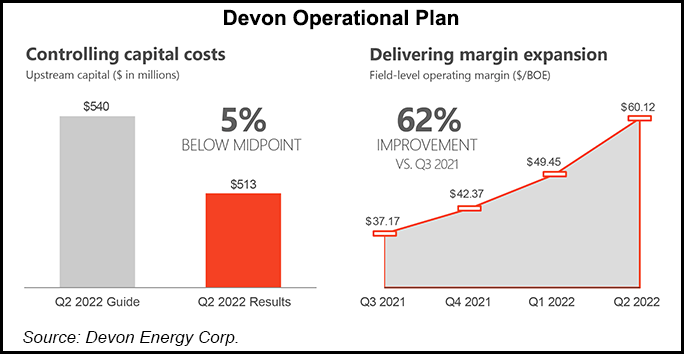 On the back of strong performance in the Permian Basin, Devon Energy Corp. reported higher natural gas and oil production during the second quarter, with efficiencies helping to hold the line on costs.

“The second quarter saw our business continue to strengthen and build momentum as we delivered systematic execution across the financial, operational and strategic tenets of our cash-return business model,” CEO Rick Muncrief said.

“As a result of the strong financial and operational performance achieved year to date, we have updated our full-year 2022 guidance. This improved outlook raises production targets, increases free cash flow projections and enhances our ability to accelerate the return of capital to shareholders.”

Production volumes were raised 3% for the year to 600,000-610,000 boe/d. Upstream capital spending was boosted to $2.2-2.4 billion, about $250 million higher in part because of the recent RimRock Oil and Gas LP acquisition in the Williston Basin.

The Oklahoma City-based independent works across the Lower 48, with most activity in the Permian Delaware. It also has a solid base of assets in the Anadarko and Powder River basins, as well as the Eagle Ford Shale.

COO Clay Gaspar, who joined Muncrief on the conference call, said this year Devon was “continuing with the never-ending challenge of improving system processes and culture, but we’re also keenly focused on external factors like inflation and supply chain uncertainty.

“While these challenges are real and something we dedicate a lot of attention to. I’m also fully confident in our team’s ability to once again differentiate Devon from the pack and execute on an exceptionally high level.”
The quarter’s “solid production was better than forecast,” Gaspar noted, while capital efficiency and the expansion of per-unit margins were “the highest level in more than a decade.”
Across Devon’s portfolio, the average 30-day initial production rates in 2Q2022 were 2,900 boe/d per well, Gaspar said.

Asked if management would consider bolstering the other Lower 48 plays, which were down versus the Permian, Gaspar said the Permian returns were too good to not take advantage. That means “we’re still going to be obviously dominated by Delaware activity.

Of the total $580 million in capital spent during 2Q2022, the bulk was directed to the Permian with $374 million. Devon also spud almost three times as many wells as the second place Anadarko. It also tied in more operated wells at 52; the Eagle Ford was second at 14.

CFO Jeff Ritenour said the record high dividend is payable at the end of September.

“This payout represents a 22% increase from last quarter, and includes the benefit of a 13% raise to the fixed dividend,” he said.