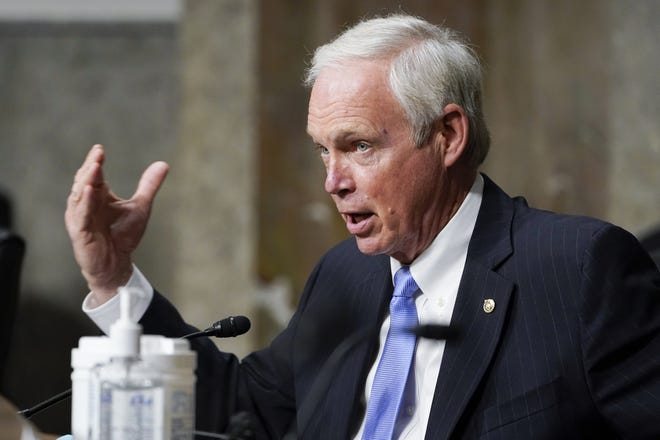 Here’s why: With passage by Democrats of a new measure aimed squarely at tackling climate change, the issue is taking on a new urgency in the fall election.

Those who opposed the measure, including U.S. Sen. Ron Johnson, R-Wis., are being targeted by environmental groups and others.

That includes the claim of using an expletive to dismiss climate change, and pulling in campaign money from oil and gas companies.

Let’s take a closer look at both parts of that claim.

So did Johnson make light of climate change?

While speaking to the Republican Women of Greater Wisconsin on June 5, 2021, Johnson’s speech did, in fact, turn to climate change.

“I don’t know about you guys, but I think climate change — as Lord Monckton said — bull – – – -,” Johnson said, based on a video of the luncheon. He was referring to Lord Christopher Monckton, a noted British climate change skeptic, and mouthed the expletive before adding aloud: “By the way, it is.”

Legions of scientists have researched climate change and determined it is real, with its impact seen in heat waves and drought in some areas, and rising sea levels in others.

When asked later about his comments by the Milwaukee Journal Sentinel, Johnson tried to soften the remark a bit, saying that he is not a climate change denier, nor is he a climate change alarmist.

“Climate is not static,” he said. “It has always changed and always will change.”

But the bottomline: Yes, Johnson was caught on video referring to climate change that way.

So, what about the second part of the tweet? Exactly how much has Johnson gotten from the oil and gas industry?

When we asked for backup for the claim, David Willett, senior vice president of communications for the League of Conservation Voters, said the information came from OpenSecrets, a nonpartisan nonprofit research group that tracks money in politics.

According to OpenSecrets, Johnson has taken $753,247 from the oil and gas industry since 2009. That period covers Johnson’s entire tenure in office, since he first won election in 2010.

The site does not further break down how that money was spent on Johnson. It doesn’t say whether the money was directly contributed to Johnson’s campaign or whether other groups spent it on his behalf, such as for ads against opponents during an election.

Included in the donors to Johnson is Koch Industries, which does some work in the oil and gas industry. Donors affiliated with the company have contributed about $67,000.

As a point of reference, Johnson is far from the top recipient of donations by the industry.

U.S. Sen. Mitt Romney, R-Utah, has received more than $8 million in donations during his time in office, while U.S. Sen. Ted Cruz, a Texas Republican, has taken over $4.1 million.

In fact, Johnson doesn’t even crack the top 20 recipients in Congress of oil and gas industry donations, according to OpenSecrets.

Neither is the oil and gas industry the largest contributor to Johnson, according to OpenSecrets. Over the years, securities and investment, real estate and manufacturing have been some of the largest industry donors.

The League of Conservation Voters claimed Johnson “called climate change ‘bull – – – -’  during a record heatwave” and “raked in over $700k in fossil fuel cash.”

Both parts of the claim check out, from a much-publicized comment made at a luncheon in 2021 to publicly available campaign contributions, as organized and analyzed by a reputable nonpartisan group.

Indeed, Johnson has actually received more than $750,000 from the oil, gas and energy industry since the 2010 election, though it’s far from his biggest source of money — and he’s far from the top recipients in Congress.

We rate this claim True.