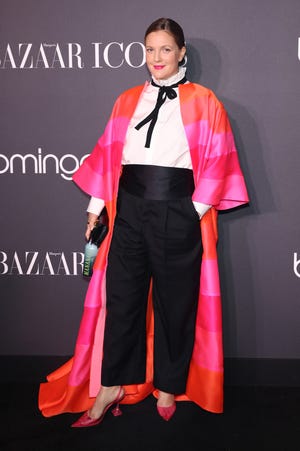 Drew Barrymore can add pizza pundit to her résumé now.

The Emmy-nominated actress and talk show host inspired awe and horror with a viral TikTok video, in which she’s seen eating a slice of pizza in a deconstructed style.

In the video posted Friday, Barrymore removes the toppings of her pizza to create what she calls a “pizza salad.”

“I’m sure people are going to be like, ‘How dare you do this to a pizza,’ ” says Barrymore as she scrapes off the pizza’s toppings. “I get it. I feel really guilty about it myself.”

After scraping off the pizza’s top layer, Barrymore mixes the toppings with a salad she had on standby, and pours a dash of what appears to be salad dressing for added flavor.

“It’s actually really crunchy and delicious,” Barrymore says. “And then you get the satisfaction of eating a pizza.”

Barrymore couldn’t ditch tradition entirely however, grabbing another pizza slice with her hands and taking a bite at the end of the video.

Viewers were divided over Barrymore’s approach to eating pizza, with some feigning outrage.

“How dare you do this to a pizza,” user mohm ita wrote.

“Drew you are BETTER THAN THIS,” user Caity commented.

Others were behind Barrymore all the way.

“You can do no wrong in my eyes,” Cameron Domasky commented. “I’m gonna try it before I say anything, then let you enjoy your meal if I disagree.”

“No wait, you’re actually onto something,” user XIIXXXXC wrote.

From 2021:Drew Barrymore says Simone Biles is a ‘beautiful’ example of what it ‘looks like to say no’

While the jury is out on Barrymore style, there may be a precise art to eating pizza, depending on the type of pie you’re dealing with.

Stefano Cirene, owner and executive chef of the Australian restaurant Verace Pizzera, told The Daily Telegraph in 2018 that a Neapolitan-style pizza should be folded when eaten.

“You need to pinch the edge of the pizza, the left and right sides should touch, and (the pizza) must be soft,” Cirene told the outlet. “It must never be crunchy.”

Cirene said this method reflects the informal origin of the handheld meal.

“It was a street food to be eaten on the go, almost like a sandwich,” Cirene explained. “They would fold it, then fold it in half again, like a crepe.”