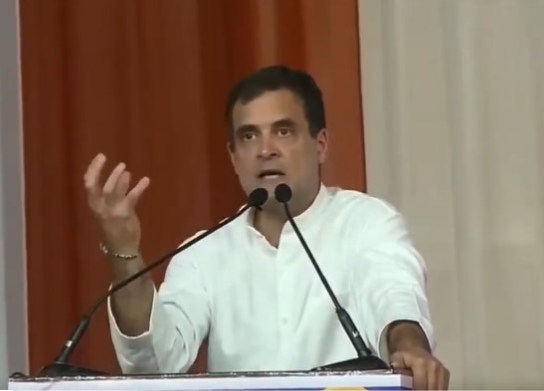 Senior Congress leader Rahul Gandhi unleashed another rant against the BJP and the Adani group on Monday, September 5, while addressing the ‘Parivartan Sankalp’ convention of the Congress’ ‘booth warriors’ at the Sabarmati riverfront in Gujarat. However, in keeping with his habit, he ended up contradicting himself a few seconds into the speech.

Gujarat has become the center of drugs and all drugs pass through Mundra Port but Government doesn’t take action. What is the reason that drugs is recovered every two-three months at Mundra Port: Rahul Gandhi in Gujarat pic.twitter.com/C2bYrUrGZf

The Gandhi scion, taking a dig at the Adani Group that manages the Mudra port in Gujarat’s Kutch district and the BJP government in the state, claimed that Gujarat has turned into a major drug hub and that all drugs move via the Mundra Port, but the state government does nothing to stop this. Nevertheless, in the same breath, he asserted that drugs are routinely seized from the Mudra port, thereby invalidating his own accusations.

“What is the reason that drugs are recovered every two three months at Mundra Port,” said Rahul Gandhi, inadvertently admitting that the government along with the port authorities have continuously been working to stop the smuggling of the contraband.

Basically, what Rahul Gandhi was trying to do was first, attack the Adani Group, which manages the port, by implying that the port is being used to smuggle contraband, an accusation that the Gandhi scion has time and again used to malign the chairman of the group, Gautam Adani.

In addition, Rahul Gandhi, who has repeatedly asserted that only Adani and Ambani (Adani Group CEO Gautam Adani and Reliance Group CEO Mukesh Ambani) have benefited from all the reforms the Modi government has implemented, attempted to defame the BJP by alleging that the Gujarat government has turned a blind eye to the drug trade through the Mudra port.

The Gandhi scion’s accusation, however, fell flat as he himself acknowledged in the next breath that drugs are frequently recovered from the Mudra port. Perhaps he failed to notice that the drugs being seized by authorities mean that they are alert and active steps are being taken against narcotics smuggling.

It may be recalled that last year, the Adani Group had been forced to issue a media statement after the Congress party and its supporters indulged in spreading blatant lies over the seizure of almost 3,000 kg of heroin at Mundra port in Gujarat’s Kutch district by the Directorate of Revenue Intelligence (DRI) and Customs officials.

The Congress party used the aforementioned drug bust to launch a vicious attack on the Adani Group that manages the port and accused the chairman of the group, Gautam Adani, of using the port to smuggle the contraband. The Congress party and its leaders had also used the major drug bust to maliciously target the Gujarat government and the Central government over the drug bust.

Congress had then held a press conference addressed by Pawan Khera, alleging conspiracy behind the drug bust. It is notable here how maliciously Congress had spun the issue.

DRI works under the Indian government. It was a combined effort by DRI and other authorities that the major drug consignment was busted. The authorities have made arrests and raids at various locations during the investigation. If the authorities were inefficient, the drug would have reached India to be sold or smuggled elsewhere and nobody would have known about it.

Over the months, several individuals across multiple Indian states have been arrested in the case, the latest being a Delhi-based businessman who owns several high-profile bars and pubs.

But just because the bust happened in Gujarat and it was a port that is managed by Adani, Congress had spun the issue to target the Modi government, Gujarat state and Adani Group.