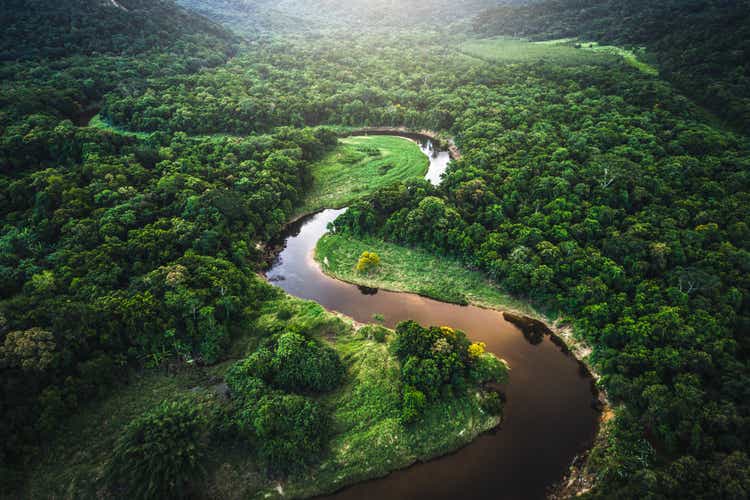 Chelopech is the flagship asset. It is a low-cost underground gold-copper mine, and it is expected to produce around 180 thousand gold ounces and 35 million pounds of copper in 2022.

Ada Tepe is the new addition to the company’s portfolio. It represents the first greenfield project developed in the Balkans in the last 40 years. It was brought into production in 2019, on time and under budget. It is expected to produce around 90 thousand gold ounces in 2022. As one of the highest grade open pit gold mines in the world, its AISC is around $714 per ounce.

Tsumeb is the company’s smelter, located in Namibia. It is one of the few existing ones in the world capable of treating complex copper concentrates with high arsenic content. The concentrates give rise to blister copper, which is resold to copper refineries in Europe and Asia, as well as sulphuric acid, which is crucial to the process of leaching of copper and uranium minerals. There is a strategic synergy with Chelopech, since the latter produces the type of copper-gold concentrate that can be treated at Tsumeb.

Then there are the two development projects of Timok and Loma Larga. Timok is located in Serbia. According to its pre-feasibility study, annual gold production is expected to be around 80 thousand ounces for the first six years, at an AISC of $693 per ounce of gold. No final decision concerning its development has been taken so far.

Loma Larga is the potential game-changing asset. The project was acquired in 2021 from INV Metals and is located in the Azuay province of Ecuador. Its development is also in doubt, due to resistance from indigenous communities. I will discuss this point in much greater detail in the following, since I believe it is the most crucial one to the company’s future.

Overall, DPM is a well-managed miner, with a track record of operational excellence and good capital allocation. The balance sheet is rock-solid, with no debt and a considerable cash position. Its enterprise value is around $450 million, after subtracting from its market cap the $423 million cash balance and $36 million liquid investment portfolio (comprised of stakes in Sabina and Velocity Minerals). This is an extremely cheap valuation from an EV / FCF viewpoint. In fact, FCF amounted to $252 million during FY 2021, and $41 million during Q2 2022. Even considering the correction in the gold price, the forward FCF run rate is projected to be in the range $150-200 million per year, giving DPM an EV / FCF multiple of less than 3x.

The large cash balance is justified by the fact that the company is planning a doubling of production over the next 5 years, with the development of the Loma Larga and Timok projects. Capital estimates for the former amount to $360 million, plus $200 million for the latter. Such estimates will likely be raised due to inflationary effects. The company plans to finance both projects via its internally generated cash flow, and not through any shareholder dilution.

Based on the recent release of Q3 2022 production results, the company is on-track to achieve its full-year guidance of between 250 and 290 million ounces. All-in sustaining cost (AISC) is projected to be around $750-$890 per ounce for the full year. However, based on the company’s remarks during the Q2 earnings conference, the fact that AISC for Q2 was $792 per ounce, and the continued strength of the dollar, full-year AISC should end up at the low end of this range.

DPM is proving more resilient than most of its peers at controlling costs. Part of the reason is that most of its operating expenses are in Bulgarian lev, and the lev has fallen by almost 14% vs the dollar in the last year. Still, costs are up compared to 2021 levels, reflecting global inflationary pressures, and in particular European power prices (partially offset by Bulgarian government power subsidies). The outlook for 2023 and 2024 has been revised lower, with AISC around $650 for 2023 and $750 for 2024, thanks to operational improvements.

While not the main reason to be excited about DPM, it is also reassuring to see the company consistently returning capital to shareholders. This is done via both dividends and buybacks. Dividends are paid quarterly and, based on trailing 12M, correspond to an annualized yield of approximately 3.5%. Share repurchases are performed under its normal-course issuer bid (NCIB) program, for up to 9 million shares, corresponding to approximately 5% of the total outstanding shares. 1.6 million have already been repurchased during the first 6 months of the year. Given the current share price, I would like to see the company prioritize buybacks over dividends.

Shares of several gold miners have been pummeled since April, when the gold price started to correct downwards. DPM has followed the trend, but the share price has suffered from additional headwinds due to idiosyncratic factors, most notably uncertainty regarding the permitting of the Loma Larga project.

I believe the share price is currently discounting significant political risk and that this risk is overpriced. The upside potential is meaningful, while there remains a considerable margin of safety. This creates a very attractive risk-reward scenario.

The margin of safety comes from the company’s very cheap valuation compared with its current FCF generation (EV /FCF < 3x). Moreover, because of the low-cost nature of its assets, even a continued weakness in the gold price will not disproportionately squeeze its margins, unlike higher-cost miners. Finally, there is the possibility on the table of selling non-core assets, to wit the Tsumeb smelter operation. This possibility appears to be completely ignored by the market at the moment. In 2018, DPM already sold an 8% stake for a total of $20 million. Assuming DPM can sell the rest at the same valuation, this would net the company around $230 million, or roughly 50% of its current EV.

The two main risks are a collapse in the gold price and bad management decisions.

Regarding the gold price, the company’s breakeven should be below $1200 / ounce. Unlike most silver miners, gold miners continue to be very profitable, since the metal is trading so much above its production costs. I discussed my outlook for gold in a recent article. Basically, gold is roughly fairly valued at the moment, but getting cheaper as inflation proves to be sticky. There is probably more downside as the Fed keeps hiking into 2023, but most of the movement in rates has already happened. The moment that peak tightening is reached will probably be a significant catalyst for the gold price.

There remains the risk that the company makes another bad acquisition and wastes its cash position. However, I see this as unlikely. The company’s strategy is focused on optimizing current operations and replenishing reserves via its new greenfield projects. Such projects are going to need the cash to be developed.

The multibagger potential of DPM is linked to the development of its Loma Larga project. The market appears to be placing zero value on it, since its final development is currently uncertain. But, in this way, the market is offering investors some great optionality at very low cost. Besides, if Loma Larga doesn’t get built, the company is still trading at a historically low valuation based only on its current operations. In conclusion, I see DPM as a classic value opportunity, with embedded optionality.

The quality of the project is not in doubt. Loma Larga is an underground gold-copper-silver project, with a 12 year life-of-mine, based on proven & probable reserves of 2.2 million ounces of gold and 88 million pounds of copper. It is projected to add 200 thousand ounces per year over the first 5 years, at a very competitive $700 AISC per ounce. It is crucially needed to replenish Dundee’s production pipeline. As can be seen from the following graph, the two Bulgarian assets cannot sustain any meaningful growth, while Loma Larga (together with Timok) would roughly double production volumes by 2026.

Nonetheless, the project has been mired in controversy and delays, due to the opposition from indigenous communities. Currently, the company is advancing the revised feasibility study, which is targeted for completion by the end of 2022, but drilling activities are paused, following appeals against the constitutional court decision on the protective action. The matter should be resolved, according to company’s statements, by the fourth quarter of 2022.

The story is quite complex. Drilling activities stopped in February, as a constitutional protective action was filed against the Ministry of Environment, Water and Ecological Transition (MAATE) by certain non-government organizations and local agencies. The action was aimed at revoking DPM’s mining concession.

The background here is that a 2021 referendum has banned mining in key hydrological areas. The concern about Loma Larga is that the high arsenic content of the ore will contaminate the “páramos”, i.e. the highland watershed regions crucial to local agriculture. This concern was first raised in an Expert Report. It should be noted however that this study dates back to 2016, i.e. five years before DPM acquired the project. DPM alleges that the project has been revised to address these concerns. From a strictly legal standpoint, the action against the MAATE is without merit, since the referendum does not apply retroactively.

In July, the judicial Labor Unit of Cuenca confirmed the validity of the environmental permits for exploration and that the MAATE did not violate rights related to water preservation. Appeals against this decision however have been raised and are currently under examination.

The situation remains uncertain. However, a reason for optimism is that the current government is quite friendly to mining and free markets. Under the leadership of the new president Guillermo Lasso, elected in May 2021, Ecuador has embarked on a program of reforms. Such a program includes the establishment of a clear legal framework to regulate the responsible extraction of natural resources and create a climate of confidence for foreign mining companies. According to the Fraser Index report for 2021, Ecuador is the 24th best mining jurisdiction among 84 jurisdictions in the world, and the second best in South America, with a score of 72.79 out of 100.

The government’s intention is to boost the economy via foreign investment in the mining sector. The state has identified 5 large-scale projects that are classified as of national strategic importance. Loma Larga is one of the five projects (together with Lundin Gold’s Fruta del Norte; Curipamba, owned by Salazar Resources and Adventus Mining; La Plata, owned by Atico Mining; and Cangrejos, owned by Lumina Gold). Overall, mining companies’ current investments in the country total $3.7 billion (roughly 4% of Ecuador’s total GDP).

Ultimately, I believe the people in the best position to assess the future of Loma Larga and the long-term prospects of the company are its insiders. And insiders are buying (the full list of insiders can be found on SEDI).

The CEO, Mr. David Rae, has been accumulating shares since August, in part as a result of its stock-based compensation and, more recently, through direct market acquisitions. In September, he purchased approximately C$180,000 in stock at an average price of C$5.97 (not far from its current share price of C$6.25).

DPM is well-managed gold miner, with a net cash position and generating considerable free cash flow thanks to its low-cost assets in Bulgaria. It is extremely cheap (EV / FCF < 3x), while still performing remarkably well from an operational standpoint and proving better than peers at controlling costs.

I see DPM as a classic value opportunity, especially considering the possibility of selling non-core assets, which alone could represent up to 50% of the company’s EV.

In addition, it offers significant upside potential if the Loma Larga project gets developed according to plan. While the situation is uncertain at the moment, the legal case against it has no merit, the current government appears to be friendly to miners, and insiders are buying.