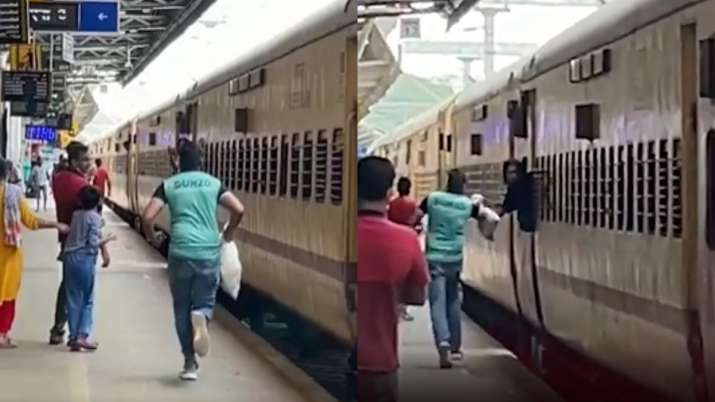 Delivery men going to extreme lengths to deliver their orders is not unusual. In the past, many videos have surfaced in which delivery people are seen working extremely hard. Now, a video is doing the rounds on the internet that shows a Dunzo delivery boy running parallely with the train to delivery order to a passener. The viral video has reminded netizens of the iconic DDLJ scene, which featured Shah Rukh Khan and Kajol.

The viral video opens with a Dunzo delivery executive running towards a passenger waiting at a train door. The video shows him carrying a white package that was meant to be delivered to the woman. As the train was about to leave the station, the lady is seen telling the delivery man to run fast. The clip further shows, the delivery man managed to pass the package to the woman, who was seen rejoicing. One of the onlookers managed to catch the action on their phone, while the location remained unidentified.

As soon as the video was uploaded, it went viral in no time. Netizens rushed to the comment section to hail the delivery man. One user wrote, Hatts off to this man really appreciated.” Another user wrote, “Dunzo should use this video as their promotional video.” A third user wrote, “DDLJ 2 leaked scene.” A user also wrote, “Dunzo wale delivery le jayenge.”

While some praised his dedication, some also took a hilarious jibe at the incident, stating that the delivery guy went absolutely ‘filmy’.

In other news, earlier, a Swiggy delivery agent was seen riding a horse carrying a food delivery bag on a Mumbai road. The video made waves on the internet. Swiggy claimed that they were unfamiliar with the individual and requested netizens to assist it in identifying the delivery partner in exchange for a Rs. 5000 reward.