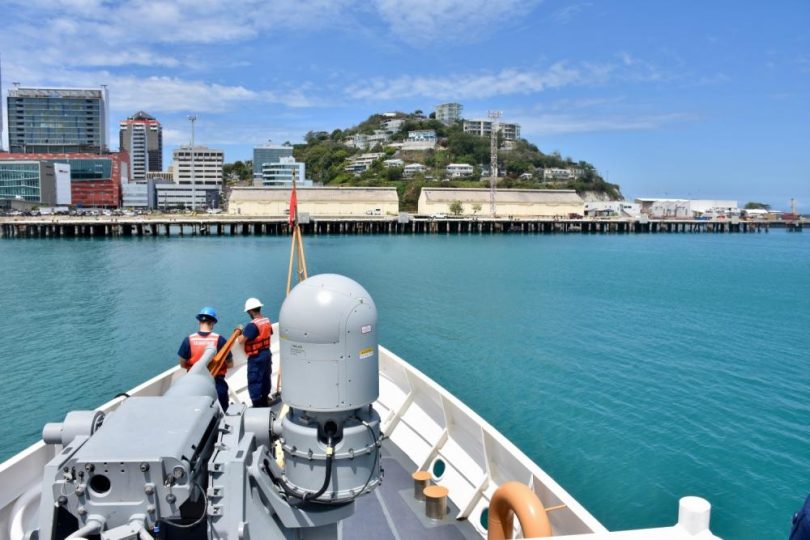 This port visit marks the third stop while conducting operations in the Indo-Pacific theater of operations, following Manus Island and Rabaul. During their stop in Port Moresby, Oliver Henry’s crew anticipates engaging with the Papua New Guinea Defence Force and local officials.

The U.S. Coast Guard maintains strong partnerships with the maritime forces in the region through extensive training and subject matter expert exchanges. The Service is seeking to increase engagement with Papua New Guinea partners.

Fisheries enforcement is complex with wide-ranging effects and requires the participation of many partners. Fish, by nature, are highly migratory, and their abundance is vital to many Pacific economies from a commercial perspective and a subsistence angle. Artisanal, also known as subsistence, fishers depend on the health of the same fish stocks to feed families and sustain communities.

According to the National Fisheries Authority of PNG, the total market value of the PNG catch is estimated at K350 to K400 million (99 to 113 million USD) on average. However, information on the actual value of artisanal fisheries is difficult to obtain, and cyclical factors and commodity price movements, especially tuna, cause huge value swings from year to year.

The U.S. Coast Guard is conducting a routine deployment in Oceania as part of Operation Blue Pacific, working alongside Allies, building maritime domain awareness, and sharing best practices with partner nation navies and coast guards. Op Blue Pacific seeks to strengthen partnerships and execute a mission to support maritime governance and the rule of law, understand, measure, and articulate regional influences and relationships, and provide our crews with the best operational assets and support to get the mission done and safely return.

The Oliver Henry is the 40th Sentinel-class fast response cutter. The ship was commissioned along with its sister ships, Myrtle Hazard and Frederick Hatch, in Guam in July 2021. In the time since, the crew has participated in several search and rescue cases, completed a counternarcotics patrol off Guam with the Japan Coast Guard patrol vessel Mizuho, and conducted sovereignty and fisheries patrols in the Forces Micronesia/Sector Guam area of responsibility.

For more U.S. Coast Guard Forces Micronesia/Sector Guam news, visit us on DVIDS or subscribe! You can also visit us on Facebook at @USCGSectorGuam.