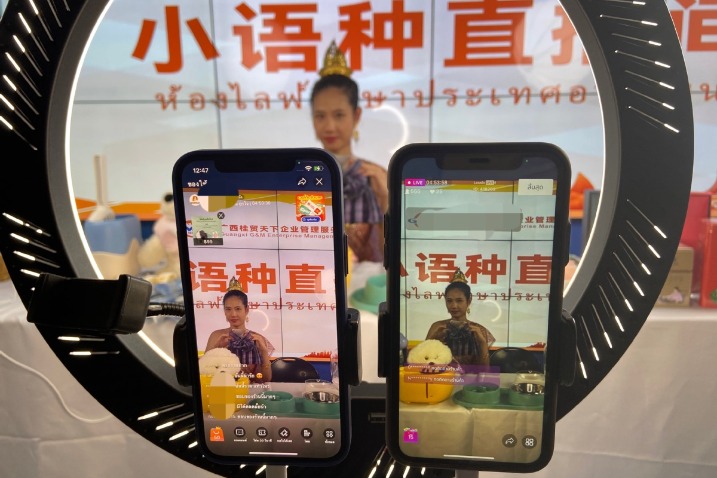 Nanning, capital of the Guangxi Zhuang autonomous region, has seen a spark in business thanks to residents who speak languages that, while regionally important, are not spoken widely across the globe, officials said.

The city is incubating its cross-border e-commerce livestreaming business as a result of the talent living there being fluent in what are sometimes called minor languages.

Yet, with a low cost of living and government support for foreign trade with Southeast Asian nations, Nanning has shown an important strength. The city has also benefited from the Regional Comprehensive Economic Partnership agreement that took effect on Jan 1, 2022.

The RCEP agreement covers 15 Asia-Pacific countries, which include 10 member states of the Association of Southeast Asian Nations. Over the next 20 years, the pact is expected to reduce up to 90 percent of tariffs on goods traded among its members.

Nanning is located close to Southeast Asian countries such as Vietnam, Laos, Cambodia and Thailand. Many foreigners have gravitated to Nanning, which has provided the city with a diverse language pool.

Nutchaya Seyungkun, a young Thai livestreaming anchor, has continued to live and work in Nanning after her graduation from Guangxi Minzu University in 2020.Besides anchoring e-commerce livestreaming sessions, Seyungkun said she is considering opening a Sino-Thai cultural company to promote exchange between the two countries.

Livestreaming has reshaped the e-commerce business in China, especially since the COVID-19 pandemic. Anchors serve as the core of the livestreaming sector, and providing a competitive salary has been critical for retaining talent.

Anchors who speak minor languages and conduct livestreaming sessions often earn 4,000 yuan ($596) to 5,000 yuan monthly, comparable to the average level of local salaries, based on public recruitment information. In higher-cost cities such as Shanghai, Hangzhou and Shenzhen, the monthly salary of a similar job is often above 10,000 yuan.

One company, Guangxi Tus Innovation Cross-Border E-Commerce Co Ltd, has recruited international students in cooperation with a number of domestic colleges, officials said. They have attracted students from Southeast Asia who are eager to learn about cross-border e-commerce and encouraged them to start their own businesses in China.

The company has also helped overseas returnees and high-level overseas talent engage in cross-border e-commerce entrepreneurship or work in Guangxi.

“The popularity of cross-border e-commerce livestreaming in minor languages in Nanning is expected to rise continuously and drive the accumulation of resources such as talent, materials and more cross-border platforms,” said Zhao Hui, head of overseas projects at Guangxi Tus.

Another company, Guangxi G&M Enterprise Management Co Ltd, a cross-border integrated service platform, opened a livestreaming center in Nanning a few months ago. It aims to recruit and train anchors and conduct livestreaming sessions on TikTok. It also plans to organize an anchor contest, officials said.

The salaries of anchors who speak English or minor languages are anticipated to range from 3,000 yuan to 20,000 yuan a month, they said.

In the first quarter of 2023, the center plans to foster 30 retailers on TikTok conducting livestreaming sessions in minor languages. It will provide offline training, and qualified businesses will be supported through subsidies, it said.

The company already operates a Thai livestreaming room, and a couple of Chinese anchors who speak Thai serve as anchors. They hold livestreaming sessions on TikTok and sell products to Southeast Asian countries, with average daily transactions exceeding 1,000 yuan.

The center plans to foster 500 cross-border e-commerce anchors and create a total of 2,000 jobs by 2025. It also plans to provide professional services to more than 1,000 local enterprises in Guangxi.

Meanwhile, the shopping platform Lazada, acquired by Alibaba Group in 2016, has been a primary force in advancing the development of livestreaming sessions locally. While the business is still in the beginning stage, the company jointly trains talent with the local government and colleges.

COVID-19 has accelerated online shopping among residents from Southeast Asian countries. The gross merchandise volume of Southeast Asia’s digital economy is expected to have reached $200 billion, according to a recent report jointly released by Google, Temasek Holdings of Singapore and management consultancy Bain & Company of the United States.

E-commerce adoption is high across both urban and suburban consumers in the six countries the report tracked — Indonesia, Malaysia, the Philippines, Singapore, Thailand and Vietnam.

According to another survey released in early December by Singaporean consultancy Black Box Research, 35 percent of surveyed respondents in Singapore said they prefer online shopping and deliveries.

In Nanning, more companies involved in cross-border e-commerce businesses are looking to work with local colleges and recruit more talent.

The School of Southeast Asian Language and Culture under the Guangxi University of Foreign Languages has been a major source of training in Asian languages in Guangxi. The school offers undergraduate majors in Vietnamese, Thai, Cambodian, Indonesian, Burmese and Japanese.

“The school has been devoted to teaching practical, interdisciplinary skills, and students should constantly improve their language abilities to be better prepared for future jobs. The school is looking to strengthen cooperative arrangements with more related enterprises,” said Wu Guiming, vice-principal of the Guangxi University of Foreign Languages.

Southeast Asian markets are continuing to expand, according to executives at Nanning Lightning Future E-commerce Business Co Ltd, and the demand for related language talent is also growing. The company hopes to work with the university and fill the shortage of those who can speak regional languages, the executives said.

The Guangxi branch of another company, Shenzhen Jiuye Industrial Group, which is involved in cross-border e-commerce business, plans to strengthen cooperation with the university by training recent graduates in minor languages at its e-commerce incubation center in Shenzhen.

During internships, the company offers opportunities for students to learn and practice in a type of apprenticeship, according to Liu Zhiping, general manager of Shenzhen Jiuye. Students will have opportunities to conduct livestreaming sessions on different social media platforms.

“Students will also engage in work such as answering and solving different problems and complaints from customers about the usage of products. We will help students introduce the related resources of trading companies and propose employment solutions based on their needs,” Liu said.