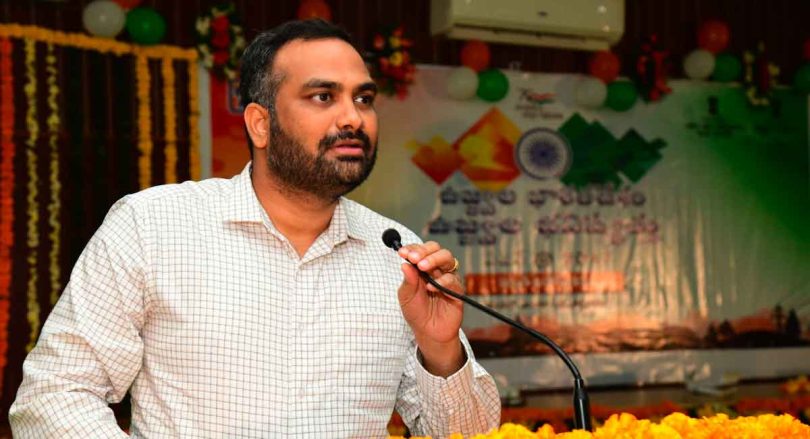 Karimnagar: Collector RV Karnan opined that besides mechanization, electrification and conservation of power were more important for the growth of the nation. Emphasizing the need to reduce carbon emissions, he wanted to utilize renewable energy in a big way for the benefit of future generations.

He participated in ‘Ujjwal Bharath, Ujjwal Bhavishya, Power@2047 celebrations organized jointly by NTPC and TSGENCO as part of Azadi Ka Amrit Mahotsav here on Thursday. Speaking on the occasion, he informed that the power generation in the state has been enhanced to 16300 MW from 6000 MW after formation of separate Telangana state.

Advising the people to develop a habit to save power, he emphasized the need to educate the people about power conservation. Students should learn how the power would be generated as well as the importance of current through the experts in the field. General Manager (maintenance), NTPC-Ramagundam, Alok Tagore said growth of the nation was not possible without electricity. Only 1300 MW power used to be produced when the country got independence. Now, it has reached 403 Gigawatts (4 lakh MW), he informed and expressed hope that it would reach to 500 Gigawatts by 2030.

Electricity department Superintendent Engineer, Gangadhar said that Telangana, which earlier faced power crisis, has emerged to supply 24 hours uninterrupted current to all sectors after formation of separate state. It was materialized only because of the Chief Minister K Chandrashekhar Rao and Electricity Managing Director Prabhakar Rao. Moreover, they have crossed the target of giving one lakh power connections to the agriculture sector.