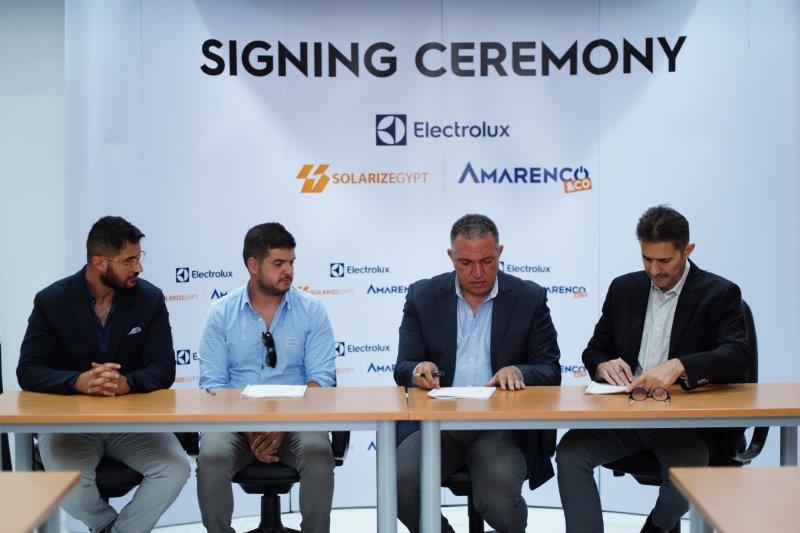 Electrolux, the world’s largest manufacturer and supplier of electrical appliances, has signed an agreement with SolarizEgypt to develop a solar power plant at the former’s factories.

The agreement consists of different phases; the first phase will cover the installation of 1.5 megawatts solar panels, including 1 megawatt in the Delta factory, which manufactures refrigerators and washing machines, and 0.5 megawatt in the stoves factory. Moreover, the company intends to install three more megawatts during the project’s second phase, aligning with Electrolux’s vision to achieve zero carbon emissions from its factories and sites by 2030, which is currently being demonstrated by reaching zero waste in the stoves factory.

In this light, Maysam El Hennawy, CEO of Electrolux Egypt, said: “This agreement complements our company’s efforts in transitioning into a more sustainable facility. Thus, implementing solar power plants for clean and renewable energy is an appropriate solution to achieve our goal.”

He added: “Under this agreement, Electrolux will continue to support Egypt’s Vision 2030, which encourages the use of renewable energy sources, and environmental sustainability measures. Despite the initial high costs of investing in the solar power plants, the government is projected to subsidize it in the future, and it will reduce the company’s consumption by around 17%.”

Ashraf El Bahwash, Head of the Manufacturing Operations at Electrolux in Asia, the Middle East, and Africa, emphasized the company’s keenness to implement all sustainability factors, especially in its factories such as plastic replacements, zero landfill, CO2 emission, water treatment, scrap recycle, light sensors for energy saving in addition to PPE and returnable package recycle

He noted that Electrolux seeks to work with its suppliers to implement the same target and to participate in all alternative energy projects in order to support the government’s strategy to utilize renewable energy, and that the Egyptian stove factory is globally recognized for being one of the factories that produces zero waste.

El Bahwash also expressed his gratitude for the opportunity to cooperate with SolarizEgypt and have access to its in-depth industry knowledge, which helps Electrolux in pursuing its aims and goals.

Yassin Abdel Ghaffar, Founder and Managing Director at SolarizEgypt, said: “Despite the fact that we have ongoing projects that exceed 50 megawatts, we are pleased with our agreement with Electrolux, which combines the use of renewable energy, energy-saving products, and sustainable practices. We are also proud to be a part of this initiative before the start of the activities of the UN climate conference (COP27), which will be held in Sharm El-Sheikh, to discuss the global environmental agenda, and the future steps towards achieving sustainable development.”

Khaled El Zomor, Commercial President of SolarizEgypt, also expressed his pride in signing an agreement with a notable company dedicated to achieving the Sustainable Development Goals (SDGs), such as Electrolux. He said: “The private sector in Egypt contributes greatly to the promotion of renewable energy. Therefore, we are happy to share our expertise with Electrolux in order to help it achieve its sustainable development goals.”

Despite the vagaries and volatility, SolarizEgypt and Electrolux have joined forces to achieve 25 years of safe operation and decarbonization of the electrical system.

It is worth noting that 588 metric tonnes of carbon dioxide will be offset annually, and a 0.5 megawatt solar power station will be developed on a 6,500 square metre site. Additionally, a solar power plant will create 1,680 megawatt-hours of electrical energy per year on an area of 11,850 square metres in the Delta factory, and it will compensate for carbon dioxide emissions with 1,136 metric tonnes per year.