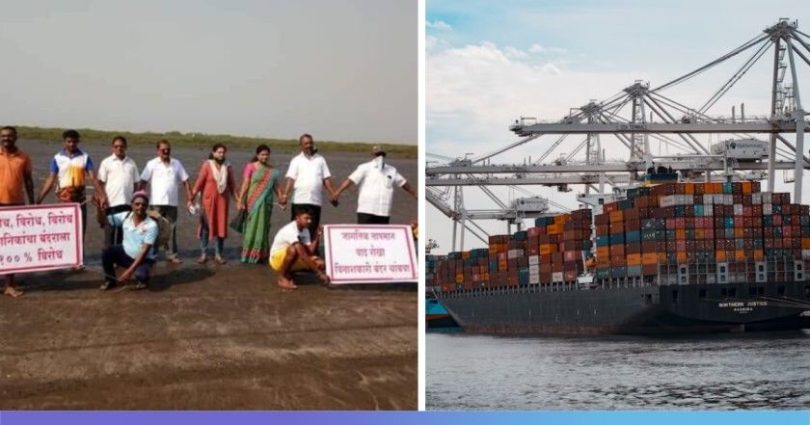 Around ten thousand people from the indigenous community gathered at the Azad Maidan of Mumbai on Monday to protest the rollback of the proposed Vadhavan Port project in the Dahanu district. The Mumbai Police has stated that somewhere between eight to twelve thousand fishermen, adivasis, farmers and residents of the Palghar district gathered under the banner of ‘Chalo Mumbai’ to express their dissent against the project.

What Is The Vadhavan Project?

Approved by the Union cabinet in February 2020 as a part of the centre’s Sagarmala programme, the Vadhavan Port will be the largest port in Asia and will help drive economic activities in the coastal regions of Maharashtra. The project is estimated the cost ₹ 65,545 crores and will be constructed at Vadhavan near Dahanu.

Currently, Maharashtra has two ports – Mumbai and the Jawaharlal Nehru Port Trust (JNPT) – which cater to regions like Maharashtra, Delhi-NCR, Punjab, Rajasthan and Uttar Pradesh. Over the last few decades, Mumbai has had constraints in evacuating cargo due to the scale of development in and around the city affecting the depths of the harbour. Moreover, JNPT, which was developed as a satellite port, and is currently the country’s largest container port, is unable to single-handedly manage the cargo traffic, reports The Indian Express.

The Vadhavan Port will be constructed 140 km away from Mumbai and 150 km away from JNPT, thus becoming a focal point to manage spillover activities from the other two ports. Compared to JNPT, the port will also attract considerable traffic from parts of Madhya Pradesh and Gujarat. Experts say that the port will push India into the list of the top ten countries with container ports worldwide.

The Vadhavan Port will also be getting a dedicated road and rail service so as not to interfere with the local traffic. Moreover, with a natural draft of about 20 metres closer to the shore, the port will be able to handle bigger vessels too.

Why Are People Protesting Against Vadhavan Port?

The land where the port is to be constructed has been declared ‘economically fragile’ since 1991 by the Ministry of Environment, Forest and Climate Change (MoEFCC). Consequently, the proposed project was called off by the Dahanu Taluka Environmental Protection Authority, considering the kind of environmental damage it would elicit in the region.

However, with MoEFCC’s recent notification declassifying ports, harbours and jetties as ‘industrial activities’, the project has been revived once again. Construction of the project meets dissent as it could, forever and drastically, change lives for several reasons: a rise in pollution, adverse effects on natural biodiversity, loss of common lands, risk of flooding, and loss of traditional livelihoods.

Speaking to Hindustan Times, the Vadhavan Bunder Virodhi Sangharsh Samiti – which is leading the resistance – said, “The proposed port will thus lead to the collapse of an entire self-sustaining economy in the region, thereby displacing a huge number of fishermen, small-scale industries, farmers and adivasis.”

Those against the project conducted a protest in December 2020, too, by forming a human chain on the Vadhavan beach, chanting, “Ekach zidd, Vadhavan Bundar radd”, meaning, “Only one demand, cancel Vadhavan Port”. However, their demands fell on deaf ears. Now, while the protesters met state chief minister Eknath Shinde recently, they haven’t been able to reach any conclusion regarding the construction yet and hope to meet him again soon to relay their concerns.