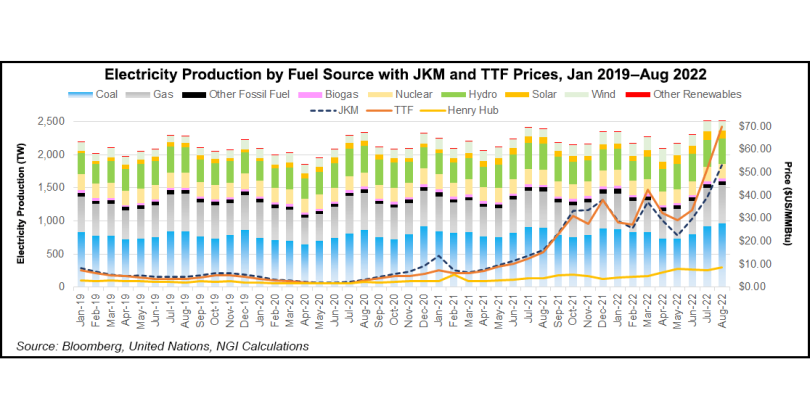 The global push to reach net-zero emissions and meet the world’s future energy needs will cost trillions of dollars and require far more than renewable technologies, according to energy executives.

“We’re still at that very early phase where we make these grand pronouncements and we’ve tried to jumpstart the machine without fully understanding, communally, the economics and all of that,” said Societe Generale’s Karl Pettersen, chief sustainability officer for the Americas.

Who pays for decarbonization and how best to achieve it are the energy transition’s fundamental questions, panelists said late last month at the North American Gas Forum in Washington, DC.

“Today, we still don’t have an answer to who actually pays for this,” Pettersen added. “Markets are designed to pass costs on to consumers. I don’t think that’s a good idea. We know what the balance sheets of corporate America look like, and it’s not going to happen.”

There must be new “market mechanisms and political tools to help us allocate this type of risk and the dollar funding” that’s required to figure out pathways toward the future energy mix, Pettersen said.

Commodity prices have been extraordinarily volatile this year, while fossil fuel shortages and a lack of renewable output at times in Europe has helped push power prices to record highs. The continent’s energy crisis has reverberated throughout global markets and cast a spotlight on aggressive energy transition plans that have partly curbed investment in the oil and gas sector.

“The biggest lie of the climate movement is that we can get there without a price increase,” said Tellurian Inc. CEO Octávio Simões. “If you look at what needs to be done in reducing emissions and adding energy for the world, it’s not going to be cheaper or the same price.”

He stressed that an opportunity exists to decarbonize the oil and gas industry so that it can better aid in reducing emissions and creating additional energy for consumers across the world. But he added that the industry “has been starved of capital,” which has resulted in a shortage of supplies.

Tellurian is developing the 27 million metric tons/year Driftwood LNG terminal in Louisiana. But it has yet to sanction the project. The company still does not have financing to build the facility.

Quantum Energy Partners CEO Will VanLoh said there’s no doubt the world will need more energy in the future, which he said is likely to include more fossil fuels than today.

The fastest growing portion of the world’s energy stack is wind and solar power, said VanLoh, who founded the private equity firm that has investments across the energy value chain.

“Any way you want to kind of slice it over the next three decades, we’re not going to be able to get anywhere close to supplying our entire energy deck with wind and solar,” he added. “As a matter of fact, we’ll probably be using more coal, more gas and more oil 30 years from now than we’re using today.”

In that case, VanLoh stressed the imperative of lowering the costs associated with carbon capture technology and said the world must also start planning to install more nuclear power.

Ultimately, VanLoh estimated that the cost of reaching net-zero emissions and finding solutions to better address climate change range from $100 trillion to $275 trillion.

“By some estimates, it could be a quarter to a third of all the capital raised and available for investment every year globally,” VanLoh said. “…How this plays out is going to affect every industry, every human being on the planet in material ways. The West has bought into this. There is no going back. So we’d better figure out how to get there.”