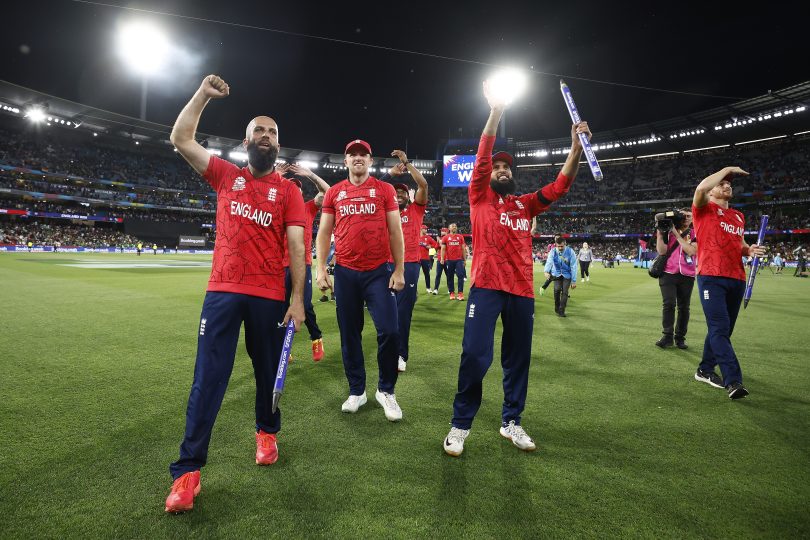 From the underperforming low of a loss to Ireland, to victory on the biggest stage of all, England enjoyed a rollercoaster ride to the ICC Men’s T20 World Cup title.

For the second time in their history, England’s men are T20 champions of the world.

We take a look at how Jos Buttler’s side negotiated the past four weeks of T20 World Cup action to claim the title in Melbourne.

Match highlights of England getting their ICC Men’s T20 Word Cup 2022 campaign off to a strong start with a five-wicket win over Afghanistan.

A win first up was a nerve-settler for England, and Sam Curran’s outstanding returns of 5/10 were a sign of things to come for the left-armer.

England huffed and puffed a little in the chase of 113 to win, but Liam Livingstone and Moeen Ali finished the job down the order

The low point of England’s campaign came at a damp MCG. Andrew Balbirnie and Lorcan Tucker took advantage of some sub-standard bowling in the first half of Ireland’s innings, but England would still have backed themselves at the halfway stage.

But, with rain forecast, England were tentative in their chase and never got ahead of the required rate.

Some big hits from Moeen Ali almost rescued the situation, but the rain arrived before the left-hander had faced many deliveries, leaving England narrowly behind on DLS and suffering a famous loss to their neighbours.

A washout left England in a tricky spot in Group 1.

To share the points with Australia after losing to Ireland meant that Buttler and his team couldn’t afford another loss.

Neither team were happy with the no-result outcome, but the game had threatened to be a win-or-bust fixture for both teams and sharing the points at least meant they both still had stakes in the competition.

Match highlights of England holding off New Zealand for a 20-run victory that kept their hopes of making the semi-finals of the ICC Men’s T20 World Cup 2022 alive.

Those dropped points had left England in a position where they faced effectively four must-win matches in succession to win the World Cup.

A meeting with an in-form and group-leading New Zealand was a tricky test, but an opening stand of 81 runs got England off to a flier, and a total of 179/6 was always going to be difficult to chase down.

There were some nerves during the middle overs when Glenn Phillips got going, but some tight bowling at a crucial point left New Zealand with too much to do.

Another strong opening stand got the chase off to a decent start, but a collapse did see things get tighter than expected, with Ben Stokes forced to step in with a rescue job of 42* from 36 balls to see England home with four wickets to spare.

A demolition job and England’s best performance of the tournament by a distance came against India in the semi-final.

The bowlers did a tidy job to restrict India to a competitive yet chaseable 168/6.

But the stars of the match were England’s opening pair of Jos Buttler and Alex Hales, who chased it down without losing a wicket and with four overs to spare.

A famous victory for England at the MCG saw a classic Ben Stokes innings. His unbeaten 52* from 49 balls saw his side home, accompanied by some handy cameos from Jos Buttler, Harry Brook and Moeen Ali.

Brilliant bowling from Sam Curran and Adil Rashid kept Pakistan in check in the first innings, and even a first-over strike from Shaheen Afridi couldn’t knock England off their stride in the chase.