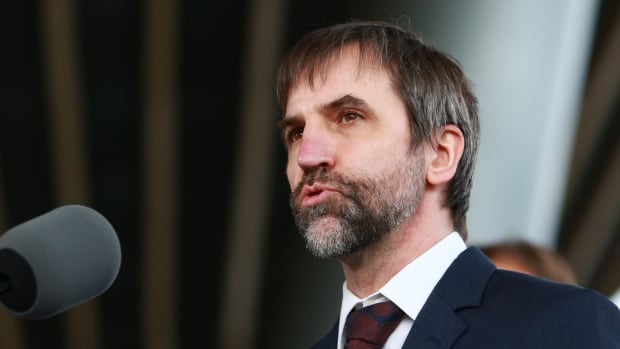 Environment Minister Steven Guilbeault says Canadians should pay attention to the action on climate change being taken by the international community — not the presence of hundreds of oil and gas representatives at COP27.

In light of the importance of promised measures on climate change that could lower the range of potential warming, Guibeault said in an interview on CBC Radio’s The House that “there could be 1,000 of these people here, I couldn’t care less.”

Some observers have protested the presence of over 600 representatives of the oil and gas sector at the COP27 meetings in Sharm el-Sheikh, Egypt. Several of those representatives are part of the official Canadian delegation, including Pathways Alliance, a group of six Canadian oil and gas companies committed to reducing oil sands emissions to net zero by 2050.

From the sidelines of COP27, Environment Minister Steven Guilbeault talks about the government’s planned oil and gas emissions cap, the role of nuclear power in reducing emissions, and the forthcoming climate adaptation plan.

“There are more oil and gas representatives at this climate change conference than there are representatives from ten of the most vulnerable nations in the world,” Tzeporah Berman, international director for environmental organization Stand.earth, told CBC News.

Guilbeault argues for working with industry to decarbonize.

“They can have their voices heard just like everyone else, but what’s important is let’s look at the results,” said Guilbeault.

Mark Cameron, a vice president at Pathways Alliance, said in an interview with The House that his organization hasn’t come to COP27 to influence Canadian government policy, but instead to learn from international peers about how to contribute to emissions reduction.

“Our size of contribution to the problem also means that we have to be a major part of the solution. There’s really no way of addressing issues around climate without having people involved in major industries, whether it’s cement or steel or oil and gas, as part of the conversation,” Cameron said.

One of the items Guilbeault listed as an example of action on climate was a cap on emissions in the oil and gas sector, which he now says will be in place by the end of next year.

Guilbeault said the measure — which was announced at last year’s COP26 in Glasgow — needs time for adequate consultation.

“You can’t, in a country like Canada, a democracy like ours, you can’t flick a switch and then make new regulations appear out of thin air,” Guilbeault said. He argued that two years was a relatively speedy timeline, noting the five years it took to implement a clean fuel standard.

WATCH | Shift away from oil a focus at COP27:

The worldwide demand for gas, and its potential to derail emission targets, is top of mind for many at the COP27 climate summit as a slew of important American politicians descended on the conference Wednesday.

The oil and gas sector is the largest source of emissions in Canada, accounting for about 27 per cent of total emissions in 2020. The emissions cap put forward by the government is meant to contribute to an overall goal of reducing oil and gas emissions to 42 per cent below 2019 levels.

There are currently two proposed options for the policy: a cap-and-trade model or a modified carbon price system.

When the government first put forward its emissions cap plan, it was criticized by some environmentalists for focusing on emissions output, rather than on oil and gas production itself.

An emissions focus could allow for the increased production of oil and gas, so long as emissions decrease through improved efficiency and measures like carbon capture and storage — a technique the federal government is backing through $1.5 billion a year in tax credits starting in 2026.

Advocating for a production cap, Green MP Mike Morrice told The House that “when they use the word emissions, what’s critical there is that allows our country to continue to produce more oil and ship it to other countries for them to register the emissions on their target.”

Guibeault responded that the government’s measures were frequently challenged legally and he had to proceed cautiously.

“If we’re not being very careful and making sure that we’re staying in our constitutional lane, then we will lose in the courts, and no one wins. The environment doesn’t win. Canadians don’t win, companies don’t win. There’s nothing to gain from us trying to do things that we can’t legally do in Canada,” he said.

Guilbeault also revealed the federal government’s strategy for adapting to climate change may be delayed.

The document, which looks to “outline how the Canadian economy and society can be more resilient and prepared for the impacts of climate change,” was originally expected from the government before COP27.

While he still hopes it can be released before the end of this year, the minister said many provincial, territorial and Indigenous partners are asking for more time for discussions — and he wants to get the result right.

“It is such a fundamental and important element to Canadians’ future so that we’re better prepared to face the impacts of climate change. So yes, maybe it is worthwhile taking a bit more time.”

When the plan does come, it will have considerable funding attached, he said. However he made it clear he also expects provinces to play a role in financing as well.