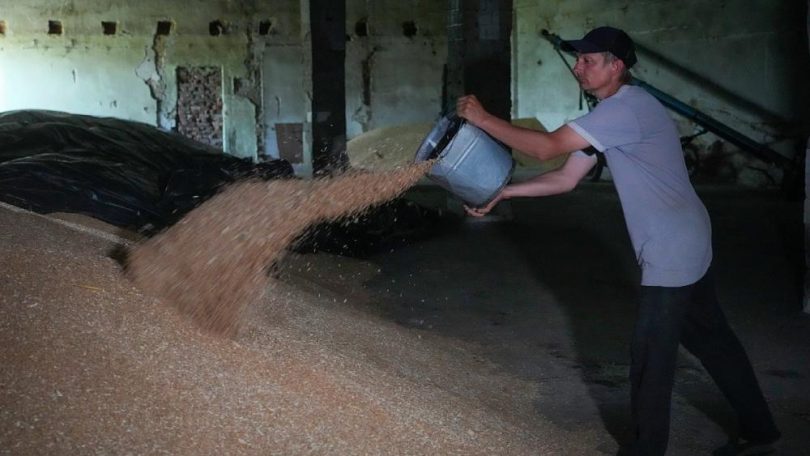 The blockade of Ukrainian wheat by Russian forces could be resolved if the European Union sends military equipment to protect the ports, Lithuania suggested on Monday ahead of a meeting of EU foreign ministers.

The impact of Russia’s invasion on food security is the main item on the agenda of the meeting held in Luxembourg on Monday as about 20 million tonnes of wheat and other grains remain stuck in Ukraine because of the war.

Prior to the war, most of Ukraine’s agricultural products were exported via its port on the Black Sea but this route has been closed due to Russian bombings. Ukrainian authorities have meanwhile mined the sea route leading to the key port city of Odesa to prevent Russian warships from launching an attack.

Efforts to reach a compromise have been ongoing for weeks but Ukrainian authorities are wary of Moscow’s pledge not to attack Odesa if the route is demined.

Gabrielius Landsbergis, Lithuania’s foreign affairs minister, told reporters as he arrived at the gathering on Monday that “military equipment is needed” to reopen Black Sea ports.

“Unfortunately, there is no other way. There’s no other way to open up Odesa and other ports in the south of Ukraine. And there are European countries, European Union countries who have the equipment that is needed. And if they provide this, I think that we can solve the crisis much, much faster,” he added.

“Basically, we need a deterrence. We need that deterrence for Russians so that they would not attack and use the opportunity when the ships are leaving the ports,” he argued.

Ukraine and Russia are together commonly referred to as the breadbasket of the world as they are the biggest exporters of wheat and other food products including sunflower oil.

More than 400 million people worldwide, particularly in the world’s poorest countries, rely on grains from Ukraine for their food supply and multiple agencies including the United Nations’ World Food Programme have warned that the war, launched by Russia on 24 February, could push these people into hunger and create famine in several countries as food prices continue to rise as a consequence.

Ukrainian and EU authorities have accused Russia of deliberately targeting Ukrainian agricultural and storage facilities to exacerbate the global food crisis. They have also accused Moscow of stealing the grain.

Russia, for its part, has blamed Western sanctions for the food crisis, a narrative the EU and US have flatly rejected, emphasising that they have not imposed restrictive measures on Russian food products or fertilizer.

“One cannot imagine that millions of tons of wheat remain blocked in Ukraine while the rest of the world people are suffering hunger. This is a real war crime. So I cannot imagine that this will last much longer. Otherwise, it would be really something that Russia would be accountable for. You cannot use the hunger or the people as a war,” he told reporters.

He called on Russia to “de-blockade the ports” and said that the 27-country bloc is “supporting the United Nations efforts to deblock the exports from Ukraine.”

He was joined in his call for an UN-brokered resolution by Ireland’s Simon Coveney and France’s Catherine Colonna who flagged the key role played by Turkey, which controls access to the Black Sea.

“This is a question that must be settled urgently. There are too many risks in leaving Ukrainian cereals blocked, it is dangerous not only for the Middle East region but for the stability of the world in general. As I said, Russia must stop playing with world hunger,” Colonna said

The EU has put forward several solutions to unblock the situation, including transporting the grain by freight to neighbouring EU countries including Bulgaria and Poland from which they could be dispatched but this is slow-going and more expensive.

Landsbergis stressed that “any other route (from Ukrainian ports) is not practically sufficient.”