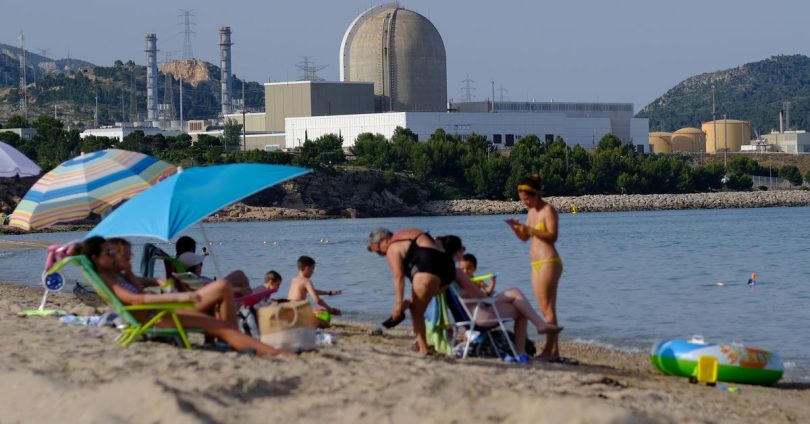 LONDON, July 21 (Reuters) – Just as Europe is racing to store enough gas to see it through winter, its power system is being strained by sweltering summer temperatures, forcing air conditioners into action and drying up rivers needed to cool nuclear plants.

The war in Ukraine and reduced supply of Russian gas had already sent energy prices soaring, and now surging summer demand has raised concern about whether those winter storage targets can be reached.

Europe is aiming to fill its gas stores by at least 80% by November, and has reached around 65%, but the task is looking tougher after flows through the Nord Stream pipeline transporting gas from Russia to Europe restarted at just 40% of capacity on Thursday following maintenance. read more

Issues with Europe’s nuclear plants, with some unable to run at full capacity in blistering heat due to higher river temperatures and low water levels impacting their cooling ability, means some generators have been turning to gas, at the exact time Europe is trying to use as little as possible.

“There is no doubt that the situation is serious and to put this in perspective you need to understand it’s happening against the backdrop of a very serious upcoming gas crunch,” said Kristian Ruby, Secretary General of industry association Eurelectric.

“If we use a lot of gas now to power our electricity systems and our air conditioners we are going to have an issue this winter,” Ruby said.

France, with a vast fleet of low-carbon nuclear power plants, has historically been a major exporter of electricity to its European neighbours, but was already struggling with a series of outages, taking more than half its plants offline.

Several of the remaining plants in France and Belgium have had to curb output amid the record high temperatures.

Equipped with few solar plants, French generators have turned to burning more gas and importing more electricity from countries producing power from gas such as Britain and Spain.

High temperatures also temporarily curbed gas flowing from Britain to Belgium when the pipeline needed to reduce capacity as the heat caused a loss of pressure, its operator said.

Britain has been exporting record amounts of gas to Europe over the past months as European countries try to build up stocks. read more

It said the alert was due to a combination of factors including high exports, low wind generation and higher demand.

In Germany, historically Europe’s largest importer of Russian gas, fears are growing that high temperatures mean water levels along the Rhine will become too low for the barges that transport commodities such as coal.

Rain over the past few days has helped the situation but shallow water is hampering shipping on the entire river in Germany south of Duisburg with vessels carrying greatly reduced loads, said a spokesman for German inland waterways navigation agency WSA. read more

PLAN FOR THE WORST

The amount of stored gas in Europe is increasing but the rate of injection into storage has slowed following supply disruptions from Russia, Rystad energy analyst Fabian Ronningen said.

European gas storage levels are much higher than at the same time last year but still just below the 5-year average.

“It actually looked quite good all the way until about July 10 when Nord Stream 1 went down and Russian flows massively went down as a result of that and injection rates have gone down,” Ronningen said.

With the situation exacerbated by the heat, meeting the European Union’s 80% target by November “will be difficult for sure”, he added.

The European Commission is planning for all scenarios regarding gas flows to Europe and set out emergency plans on Wednesday for countries to voluntarily cut their gas use by 15% until March, warning them that without deep cuts now they could struggle for fuel during winter if Russia cuts off supply. read more

Most of the gas Europe currently receives can still be injected into storage, said Henning Gloystein, director at Eurasia Group.

“The biggest problem, however, is probably that power grids across Europe must prepare for this sort of heat to happen much more frequently since these “all-time” records seem to be broken time and again now,” he said.

Reporting by Isla Binnie in Madrid and Susanna Twidale in London, additional reporting by Forrest Crellin in Paris and Michael Hogan in Hamburg; editing by Elaine Hardcastle