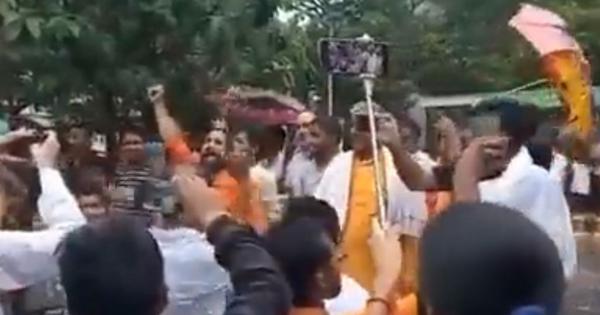 The Delhi High Court on Friday granted bail to Preet Singh, one of the organisers of a rally near Jantar Mantar on August 8 where inflammatory slogans against Muslims were shouted, Bar and Bench reported.

Singh was among the nine people who were booked under several Indian Penal Code sections, including Section 153A (promoting enmity between different groups on grounds of religion) and Section 34 (common intention). He had allegedly made the demand for a “Hindu Rashtra” at the rally.

During his bail hearing on September 15, Singh’s counsel had asked if the demand for a “Hindu Rashtra” fell under the purview of Section 153A.

On Friday, the High Court said that it would not be appropriate to express any opinion on whether the words spoken by Singh make out an offence under Section 153A of the IPC.

The High Court also observed that a large number of people had gathered at Jantar Mantar where Singh had co-organised the protest. Thus, he was “liable for any offence committed in furtherance of the common object of the assembly” corresponding with Section 34 of the IPC.

“However, as per the video footage and the call records of the petitioner, the petitioner left the spot at around 2 pm whereafter the main provocative words or slogans were shouted by the co-accused at around 4 pm,” the court said.

The court also said that since Singh was in custody since August 9, his custodial interrogation was not needed anymore.

“It is, therefore, directed that the petitioner be released on bail on his furnishing a personal bond in the sum of Rs 50,000 with two surety bonds of the like amount,” the court said.

The bail conditions prohibit Singh from leaving the country without the court’s permission. He will also have to inform the court in case he changes his residential address or phone number.

Counsel Tarang Srivastava, representing the prosecution, opposed the bail, according to PTI. He said that the investigation was still under progress.

Srivastava also said that Singh’s absence when the communal slogans were shouted on August 8 did not “absolve him from any liability” as all accused people were “acting in concert”.

Former Bharatiya Janata Party spokesperson Ashwini Upadhyay, who is one of the organisers of the event, is also out on bail.