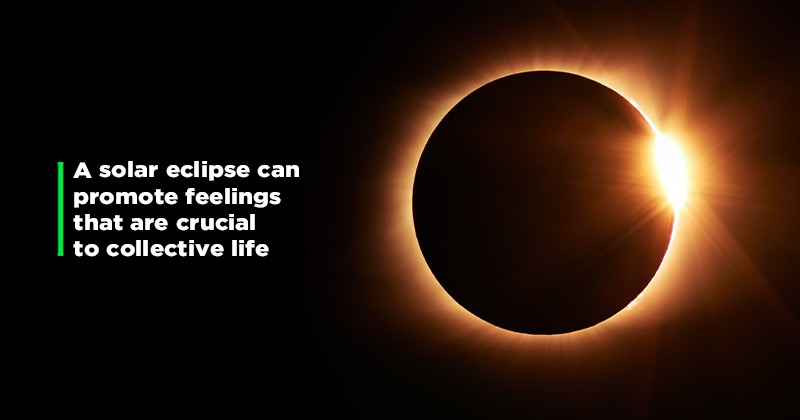 A lot of folklore surrounds solar eclipses. Now, scientists believe that a solar eclipse event can promote psychological tendencies that are considered crucial to collective life.

The study, published in Psychological Science, claims that such events may be causing measurable social effects. Researchers found that those fell in the path of a solar eclipse were less self-centred and more pro-social than those who didn’t experience the eclipse in its full glory.

Such events can become a very collective experience. Have you seen ghastly scenes of a meteor hitting Earth and people on the planet all dropping everything and collectively watching the drama unfold from the streets? That’s what it’s all about.

This study wanted to measure group functioning, awe, and self vs. group focus in the aftermath of 2017’s North American solar eclipse. Researchers collected Twitter data from 2,891,611 users through two studies for this research. The first study used information from Tweets posted between August 17-23 in 2017.

They found that even though none of these people were in the same geographic spot, their Tweets intended to capture “prosociality, humility, self/collective focus, and awe.”

For the second study, the researchers examined Twitter data before, during, and after the eclipse for people in three major metro areas.

In addition, the first study found that prosociality was noted in people that were in the path of the eclipse. They used more affiliative and collective language.

“These findings indicate that awe-inspiring astronomical events such as a total solar eclipse can arouse tendencies — from greater attention to one’s groups to motivations to care for and affiliate with others — vital to collective life,” the researchers said.

While the study still has its limitations, it’s still an exciting peek into how humans forge collective feelings and relationships during such cosmic events.

What do you think about these unusual findings? Let us know in the comments below. For more in the world of technology and science, keep reading Indiatimes.com.