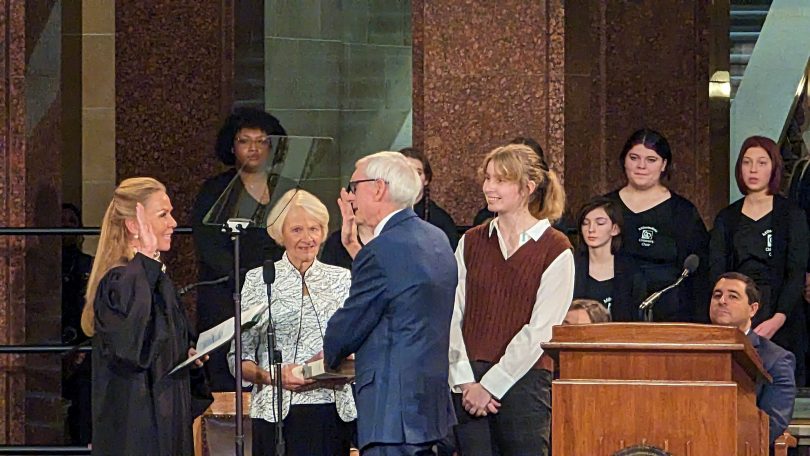 “Each time this oath is taken is a profound display of democracy,” he said. “One much like the fundamental right to cast a ballot; like the right to have fair and secure elections, free from interference by politicians; like the fidelity to each other to willfully return borrowed power when it’s no longer ours to bear.”

He didn’t mention Donald Trump by name, but he didn’t have to.

“Today represents a defining feature and an extraordinary expression of what makes our state and our country great: that the functions of democracy are derived not from any one person, any one office, or any one party, but from all of us, together,” he said.

Perhaps obliquely referring to Tim Michels’ campaign claim that Republicans would never lose another election if Michels won, Evers said: “This past November, Wisconsin rejected a trajectory bent toward permanently undermining the tenets and institutions that are fundamental to who we are as a people.”

Evers may also have been referring to Michels’s and other Republicans’ pledges to destroy the Wisconsin Elections Commission.

And Evers may even have been referring to the outrageous scheme by Sen. Ron Johnson and Donald Trump to have the Wisconsin Legislature simply toss out our votes and declare that Trump won.

Andrew Hitt, then-chair of the Wisconsin Republican Party, provided the House Jan. 6 select committee with a text confirming that Johnson contacted him on Dec. 7, 2020, with this alarmingly anti-democratic idea.

“Ron called me … and now is arguing for us to have the legislature choose the electors. OMG,” said Hitt’s text message, among the items revealed in the select committee’s final report issued at the end of 2022.

I’m not sure Mandela Barnes would agree with that latter characterization, given the disgustingly racist campaign from Ron Johnson and Diane Hendricks and Richard Uihlein that Barnes was hit with.

But kindness and hope are nice grace notes to hit, even if Evers exaggerated them.

Toward the end of his speech, Evers returned to his theme of democracy.

But he was clear-eyed that democracy wasn’t out of the woods yet.

This was an inspiring address, one that met the moment.

GET THE MORNING HEADLINES DELIVERED TO YOUR INBOX