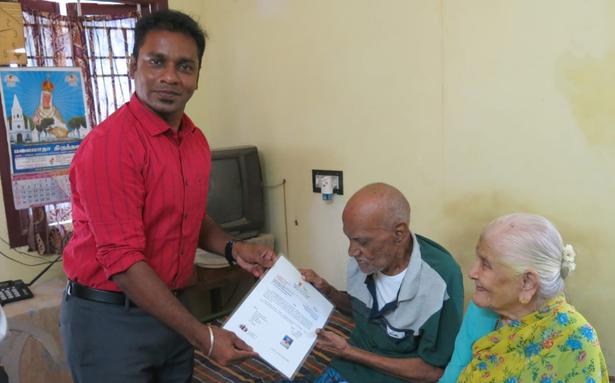 Having turned 100, Ignatius Muthu will now get a cent percent hike in his basic pension

Having turned 100, Ignatius Muthu will now get a cent percent hike in his basic pension

Having turned a centenarian, A. Ignatius Muthu savours the unique fortune of being the oldest ex-railway man in Tiruchi Railway Division today.

When he turned 100 on July 20, 2022, his family members rejoiced the occasion recounting his rich experience of having served during the times of the British Raj initially in the Royal Indian Air Force, subsequently in the erstwhile South Indian Railway, and thereafter continuing his journey post-Independence in the Southern Railway.

Upon his return to Tiruchi as an ex-serviceman, Mr. Ignatius joined the then South Indian Railway in December 1946 and was appointed as a clerk. His professional travel in the Railway Department, since the colonial era, continued from thereon till the time of his superannuation in July 1980 from the Southern Railway.

His last posting was at Mayiladuthurai Junction, where he retired as a Cabin Assistant Station Master after 34 years of service.

Those were the days of the steam locos-hauling passenger trains.Mr. Ignatius and his 96-year-old wife, Marie Antoinette, now lead a quiet and peaceful life near Samayapuram on the outskirts of Tiruchi. The couple is being taken care by their elder son I. Simon Arokiaraj, 67, who too was an ex-railway man and retired as a Senior Passenger Guard in 2014. Their other son Stephen Sahayaraj is a headmaster in a school at Tiruchi and is due for retirement in September.

Mr. Ignatius had a surprise in store for him on Wednesday afternoon, when the Senior Divisional Operations Manager, Tiruchi M. Harikumar called on Mr. Ignatius and extended his warm greetings. “It was a touching moment for all of us when the senior railway officer came calling my father,” said Mr. Simon Arokiaraj.

Now that Mr. Ignatius has completed 100 years, he will get a cent percent hike in his basic pension.