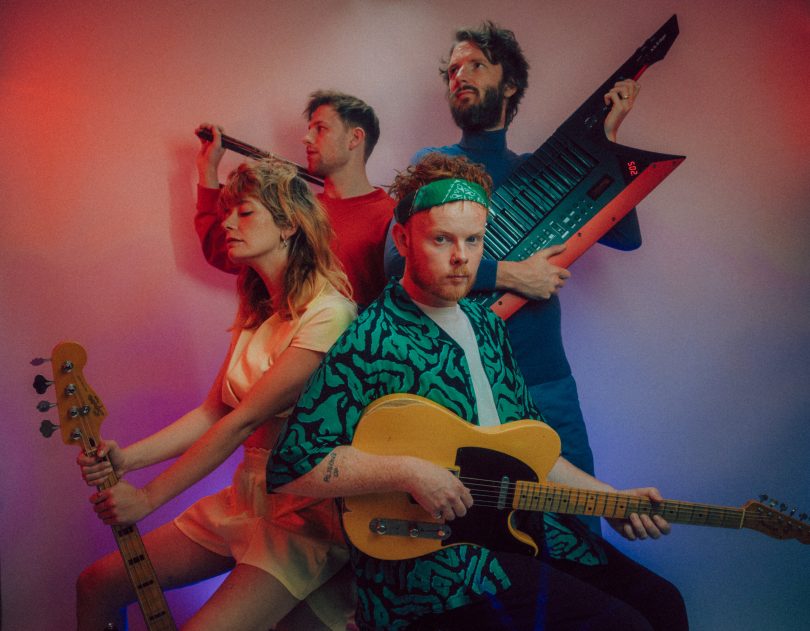 ‘Automobile‘ is the new single by Cardiff-based Welsh quartet Angel Hotel; today we are debuting the accompanying brand new video below, it will be your first chance to hear the song, too.

The band describe themselves as bringing “power pop-retro nostalgia, tongue-in-cheek imagery and contemporary indie to create their own flavour of guitar pop.”

With a fuzz-laden bright intro, ‘Automobile‘ is an effervescent tune framed in ’80s FM production and laced with, perky percussion and sun-kissed melodies, with the fading sunset in the rearview mirror. It’s not just a song about a car, it’s a catchy tune about wistful reflection and hopeful introspection.

The video sees the band spoofing a 1980s episode of Blue Peter complete with cardboard DIY (made by the band) props and plenty of lighthearted good nature. Directed by accomplished director Rhys Davies of Furball Films.

In the last two years have played shows at Greenman Festival, Focus Wales and have opened for the Bug Club, Pom Poko, CVC and many others.

Angel Hotel will be appearing at Truefest on August 21st and before then at Big Splash Newport on July 24th.