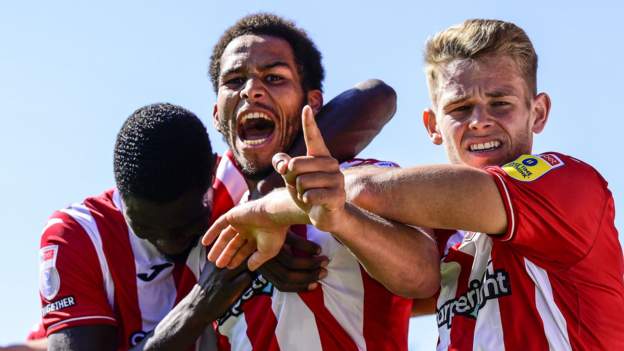 Jevani Brown struck twice as Exeter turned in a stylish performance to thrash Port Vale 4-0 in their first home game in League One for 10 years.

Harry Kite opened the scoring in the 24th minute – and the goal-of-the-season competition might as well end now.

The Exeter academy graduate set himself up from a looping clearance and connected sweetly with a sensational first-time volley that flew into the far corner from 20 yards out.

In the 37th minute, Jack Sparkes did well to spin Sammy Robinson, who clipped his heels in the box for a penalty, which Brown scored by sending Adam Stone the wrong way from 12 yards.

Robinson had a chance of redemption on the stroke of half-time, but his fierce shot was superbly saved by Exeter debutant Jamal Blackman in the Grecians’ goal.

Sam Nombe should have made it 3-0, but he fired wide when clean through. However in the 72nd minute, he turned provider by crossing for Brown to calmly slot in his second of the game.

Nombe then added the fourth in the 75th minute, turning and finishing from close range from a long Alex Hartridge throw, and it could have been more with substitute Josh Coley missing two good chances.