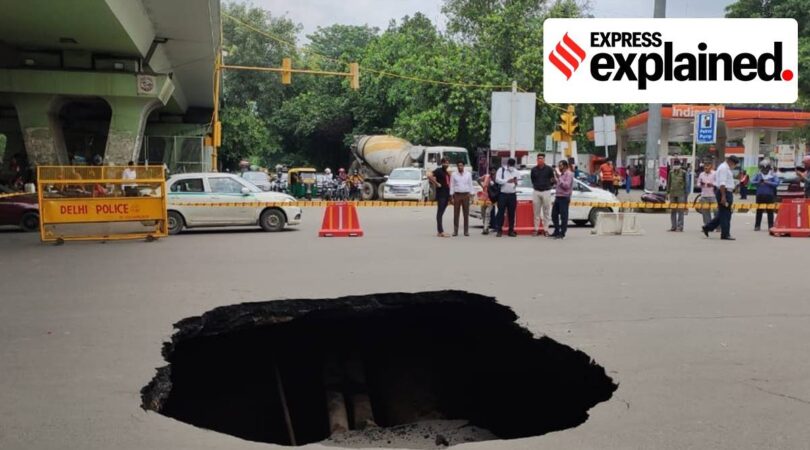 As Delhi records an unprecedented rainfall this season, it is also witnessing an increase in incidents of road cave-ins across the city. A huge cave-in was seen in Dwarka in mid-July, followed by one under the IIT flyover. Recently, smaller ones have been seen in Adhchini and one near a metro station in Dwarka.

What causes a portion of the road to cave in?

The cave-ins or cavities that look like a hole in the ground are actually a product of the incessant rain. Officials explained that the continuous rain leads to overflowing of drains, which can cause leaks in the pipeline. When a pipeline leaks and water from the pipeline flows into the layers of earth around it, the earth starts to erode and with time, it gets washed away with the water in the pipeline.

Eventually, the portion of the road over it collapses because of the erosion. How long this takes, would depend on the size of the pipelines and the leak.

In the case of the cave-in below the IIT flyover, the pipeline was very deep, and hence the cave-in had been deeper too.

Fixing the road after a cave-in

Once such an incident takes place, the first step is for the Delhi Jal Board, or whoever owns the pipeline in question, to find the leakage. The water flow needs to be shut first and this might take some time. As soon as the flow is shut and the location of the leak is established, work on the pipeline starts.

How can such cave-ins be avoided?

In order to avoid such cavities, the integrity of the pipelines would have to be checked. Engineers say that one of the ways that such cave-ins can be avoided, includes creating a system wherein the leakage can be plugged earlier on. Installing a system that checks the flow at the start point and one at the endpoint, would be able to help authorities know that there is a leak. If the leakage is plugged early, the cave-in can be avoided.