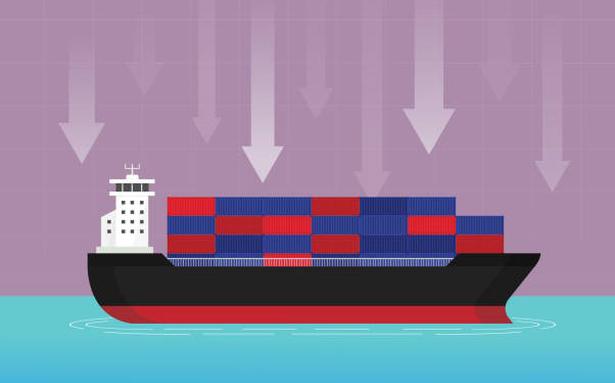 India’s goods exports in July 2022 declined for the first time in over a year, albeit only a marginal 0.76 per cent (year-on-year) to $35.24 billion, as uncertainty in the global economy slowed down demand, hitting sectors such as engineering goods, petroleum products, gems and jewellery, textiles and pharmaceuticals.

Trade deficit in July 2022 trebled to $31.02 billion as imports during the month increased 43.59 per cent to $66.26 billion, led by sectors including petroleum, electronic goods, and coal and coke, per preliminary trade estimates for July 2022 released by Commerce & Industry Ministry on Tuesday.

“This (almost static export performance) has been achieved despite measures to control inflation (in sectors such as iron ore & pellets, iron and steel and petroleum products) and the continued disruptions of supply chains due to Covid and Russia–Ukraine conflict,” per the Commerce and Industry Ministry statement.

Since February this year, when the Ukraine crisis started, the world is facing turbulent times with heavy inflation in many Western countries and phenomenal increase in interest rates, Commerce Secretary BVR Subrahmanyam said at a press briefing.

“The external world is no longer benign. We have to work hard,” Subhramanyam said, adding that factors such as the free trade agreements recently signed by India with countries such as the UAE and Australia, exploration of new markets, as well as the demand-shift from China could act in India’s favour.

Despite optimistic projections by the government, exporters of items hit by the global slowdown, are worried about the future. “Considering that the US and Europe are among the top destinations for Indian engineering goods, recessionary trends in advanced economies would certainly have an impact on exports. The muted engineering exports in June was a reflection of the weakening demand from these markets,” according to EEPC Chairman Mahesh Desai.