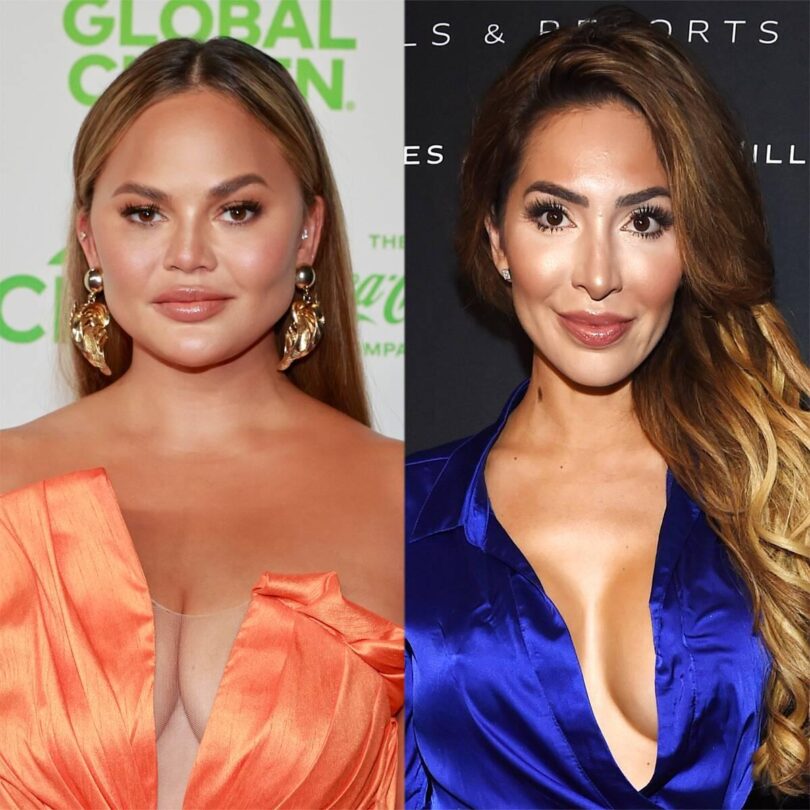 Still waiting for an apology.

Teen Mom alum Farrah Abraham may be a lot of things, but she is certainly not a fan of hypocrisy. The Dream Twenties author exclusively revealed on E! News’ Just the Sip podcast on Aug. 4 where things really stand with Chrissy Teigen following claims of cyberbullying.

“I hope she’s in a better place,” Abraham told host Justin Sylvester. “I still have not been apologized to. I’ve just noticed her habitual behavior where she will say things and go mute and-or block things, and then not follow through with what she says. Again, that is hypocrisy and I don’t tolerate it.”

Teigen previously tweeted in 2013 that Farrah was an “idiot” for releasing a sex tape. “Absolutely sickened at the fact that idiot teen mom commissioned her own sex tape and is pretending to be confused/distraught. EFF YOU,” Teigen wrote. “Seriously. This is what we have come to. This idiot from teen mom feels such hunger for fame and money and WE AS PEOPLE WILL EMPOWER HER.”

Teen Mom Status Check: Which Couples Are Still Together?

She later continued to defend her comments, adding that Abraham was a “whore.”

In May 2021, Teigen issued an apology to other reality TV star Courtney Stodden for her past behavior in 2011, and Teigen suspended her social media accounts. However, more allegations of bullying followed; by July 2021, Teigen opened up about her own mental health struggles after being “cancelled” by fans.

As Abraham revealed during the Aug. 4 episode of Just the Sip, she is still committed to connecting with Teigen to bury the hatchet. “I am always open to sitting with someone and apologizing, or confronting the situation and moving forward,” Abraham explained. “Those things are hard. Those things are not easy.”

Yet, it takes two to move forward: “I don’t understand why someone can’t become a better version of themselves and step up,” Abraham added. “That’s a little bit of a let-down for me. If you’re going to say something one way, you need to apologize the same way. But I just know the longer somebody waits to do something, when they claim they’ve already done it…I don’t know what to tell you. I just wish the best for her, for her marriage and her family.”

Abraham is instead focusing on her own family with 12-year-old daughter Sophia Laurent Abraham. “I, for one, am a mom who is like, ‘I’m turning on Teen Mom and we’re watching this because this mama ain’t got nothing to hide, but to learn from,'” Abraham joked. “I think a lot of the celebrity moms should learn now, this teen mom knows to be very transparent and very honest.”

And yes, Abraham is ready for Sophia’s “crazy years” as a teen. “The last thing I want to see is my daughter be a child star who is only getting attention on covers of magazines in a couple years for having babies and-or having fights, and-or making bad life, weird rocky road situations,” Abraham confessed. “I’ve been through that.”

For now, both mother and daughter are focusing on their mental health. “I would say therapy and all those good things are still number one for me,” she noted. “My daughter Sophia has started, she’s going to middle school now. With mental health and wellness, you can achieve all your goals, no matter the hurdles.”

Plus, Abraham will never back down when it comes to speaking up for what she believes is right. “I’m always trying to fight the good fight, to make a change,” Abraham addressed. “I clearly have never been one to sit there and not say something…I get very triggered by women who don’t support women.”

As for her parting words for Teigen? The 16 and Pregnant star concluded, “I really hope on a deeper level that someone gets to go get their ‘me time’ and gets to meet their best selves. Yes, we all deserve an apology, but yes, that person deserves to be better, because it magnifies in their space.”

Listen to the full interview above!