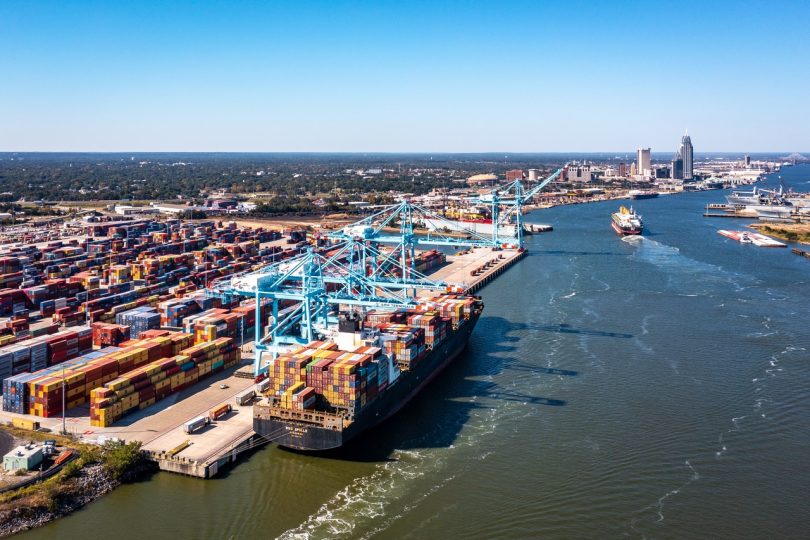 Two members of the Federal Maritime Commission praised the growth, diversity and import-export balance of the Port of Mobile during a visit on Wednesday.

As a group, they spoke highly of major expansion projects the port has undertaken in recent years, such as a project to enlarge the ship channel up Mobile Bay and to open up container rail traffic directly from the port to industrial centers in central Alabama. Those projects haven’t yet been completed, Stimpson said, but they’ve set the stage for continuing growth in the years ahead.

“At this point in time we really have not felt the impact of the deepening and widening of the channel,” Stimpson said. “Nor have we felt the impact of moving the airport next to the port. So the future growth … I’m not sure where the slowdown point is going to be.”

The commissioners noted that as major East Coast and West Coast ports experienced logjams during the pandemic, Mobile had emerged as an option. “It’s been three years since I was last here,” said Sola, “and a lot has happened in those last three years. We’ve had COVID, we’ve had supply-chain issues, we’ve also had congestion around the nation. Within that time of three years, Mobile has been put on the map for a lot of people … I was very happy to hear today that they’ve doubled the amount of cargo that they’re moving in only three years.”

“I see nothing but open road ahead for Alabama,” Sola said.

“The port of Alabama is the fastest growing container port in the United States, number one,” said Bentzel. “That is impressive.”

Bentzel said the nation depended on the smooth flow of cargo, and he’d heard a lot of horror stories about supply-chain issues in recent years. He described the port as “one of the premier growth spots in ports in the United States. It’s still relatively small but there’s lots of room for growth.”

“We’re a consumer nation,” said Sola. He said he could only think of about three ports in the country that had a roughly 50-50 balance of imports and exports, and Mobile was one of them. “The majority of them are 70, 80 or 90% imports,” he said.

“The majority of those exports [from Mobile] are agricultural,” he added.

For ports such as Mobile that gained new business during the pandemic, as shippers sought out new options during a time of supply-chain disruption, it remains to be seen how much of that business will stick: Shippers could go back to old ways if and when things return to normal, or they could stick with their new routes. The commissioners’ outlook was mixed but generally positive for Mobile.

“I think it’s a little bit of both,” said Bentzel. In some cases, he said, shippers have made major investments in facilities at specific ports, so it’s not easy to abandon those. “But I also think they’re thinking long-range, that ‘I have to have opportunities to have alternative places for entry of cargo or export of cargo,’” he said. “So I think given the stakes, the economic stakes, most companies are looking more flexibly at tailoring shipping and at least securing options as a result of the major challenges we’ve had in places like L.A., Long Beach and New York, some of the bigger ports where we’ve had heavy heavy congestion.”

“If you hit your finger with a hammer, you don’t usually do it again,” said Sola, suggesting shippers won’t quickly forget lessons learned in the pandemic era.

“The delay and the congestion is still there, and so people are looking at alternatives,” said Bentzel.

Scofield said he was on hand in part because the area he represents in north Alabama is a major poultry producing region. Poultry exports through Mobile have been on the rise since a major new refrigeration facility opened near the port in 2021.

“It’s important for the entire state of Alabama,” he said. “If the Port of Mobile does well and has greater access, then our companies and our industries will do better too in north Alabama.”